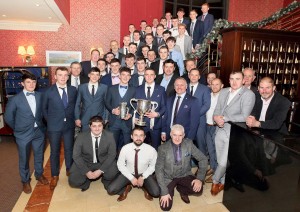 The 2016 Munster and All-Ireland Under-21 Hurling Championship-winning panel, pictured with management and the backroom team at the Park Hotel on Sunday last.

Sean Power challenges Under-21 champions to go to the next level
Sean Power has called on the players he has managed to All-Ireland Hurling glory at Minor and Under-21 levels to complete the set and end the county’s long wait for the Liam MacCarthy Cup.
Speaking to MC Kieran O’Connor at last Sunday night’s Victory Banquet at the Park Hotel, where his players were presented with their Munster and All-Ireland Under-21 medals, the Mount Sion clubman called them to take the next step. 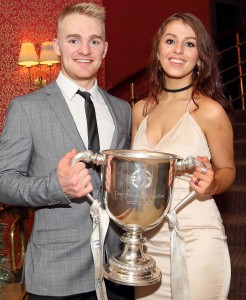 Waterford's Willie Hahessy and Roisín Murphy pictured with the James Nowlan Cup at the Park Hotel on Sunday last.

“You don’t get to where these guys have got without a great focus and a huge level of determination. But what you have as well, and there’s no doubting this, we are within a whisker of Liam MacCarthy – we really are nearly there.”
He told a packed function room: “If you look at the previous year when the seniors were well beaten by Kilkenny and then last year going within a whisker of beating them (after two epic All-Ireland semi-finals), we’re getting there. By the count, I think we had 14 guys in our panel who were involved in the senior panel last year so we really are making progress.
“And while it would be wonderful to win another Under-21 Munster Championship this year, and to retain the All-Ireland, but where we want to go now is to win Liam MacCarthy, this is where we want to finish up, and we are nearly there. So with a little bit of application and a little bit more luck, we could do this, and I don’t see why 2017 or 2018 couldn’t be our year when it comes to winning the big prize.” 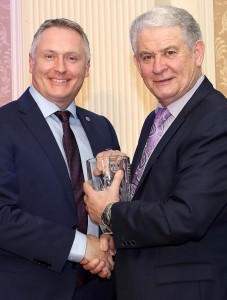 Reflecting on the differences he has noted in the panel since their Minor All-Ireland success in 2013, Sean Power stated: “They’ve all grown up a lot in the space of three years: a lot of the lads are now playing senior inter-county hurling; most of them are playing Fitzgibbon and college hurling as well, so they’ve matured greatly, they’ve developed physically, they’re bigger and stronger as well…but their mentality and the way in which they approach things has been pretty constant since they were 14, 15, 16 years old, and that’s why they’re champions. It was a stepping stone at minor and we did say to them that the next one we wanted was the Under-21 title – and they did it. These fellas are fantastic and we should appreciate how good they are.”
Interestingly, echoing a refrain declared by many of his players on Sunday night, the Munster Final win over Tipperary, in front of raucous home support at Walsh Park, struck a huge chord with Sean Power. Ask anyone who was there the night Waterford defeated Tipperary by 2-19 to 0-15: it’ll be a night long remembered.
“Up to that point, no Waterford team had ever won the Munster (Under-21 Hurling) Championship at home, so to do it at home was so special to everyone involved,” said Sean. “It was a great night and everyone enjoyed it. Those who attended the game had a special feeling night, just as we had down on the line and the lads out on the field. It was great to be involved.” 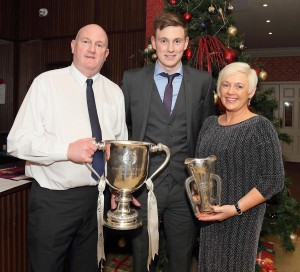 Double Hurler of the Year Austin Gleeson, pictured with his parents Austin Senior and Tina .