Fanning left to ponder why Déise bombed out

Paraic Fanning didn’t duck the post-match interview on Sunday last. For the record, Justin McCarthy chose such a path on more than one occasion in both victory and defeat during his time with Waterford. But like Derek McGrath, Davy Fitzgerald and Michael Ryan before him, the current Déise manager did not exclusively opt for the confines of the dressing room following Sunday’s dreadful display at Walsh Park. On a day when there was no dancing, an ashen-faced Fanning faced the music. “Very disappointed,” said the Waterford manager when asked to describe the post-match atmosphere in Déise ranks. “We just had our own chat in there which we’ll be keeping to ourselves, everybody is very disappointed. We’re trying to figure out, I suppose, based on the overall preparations during the year how we ended up where we are right now and that’s the hard part for us all to figure at the moment.”
It’s difficult to fathom that just two months previously, a buoyed-up Waterford were preparing to challenge Limerick in a League Final at Croke Park. It must be hard for Fanning to figure out why things have gone so spectacularly wrong in the interim? “Of course it is,” he replied. “Of course it is. That’s the thing that’s been frustrating over the last game or two that we’ve actually, you know, as I said, prepared really well and a had a good, decent League. We know ourselves, the Championship hasn’t gone to plan, there’s point saying otherwise.” 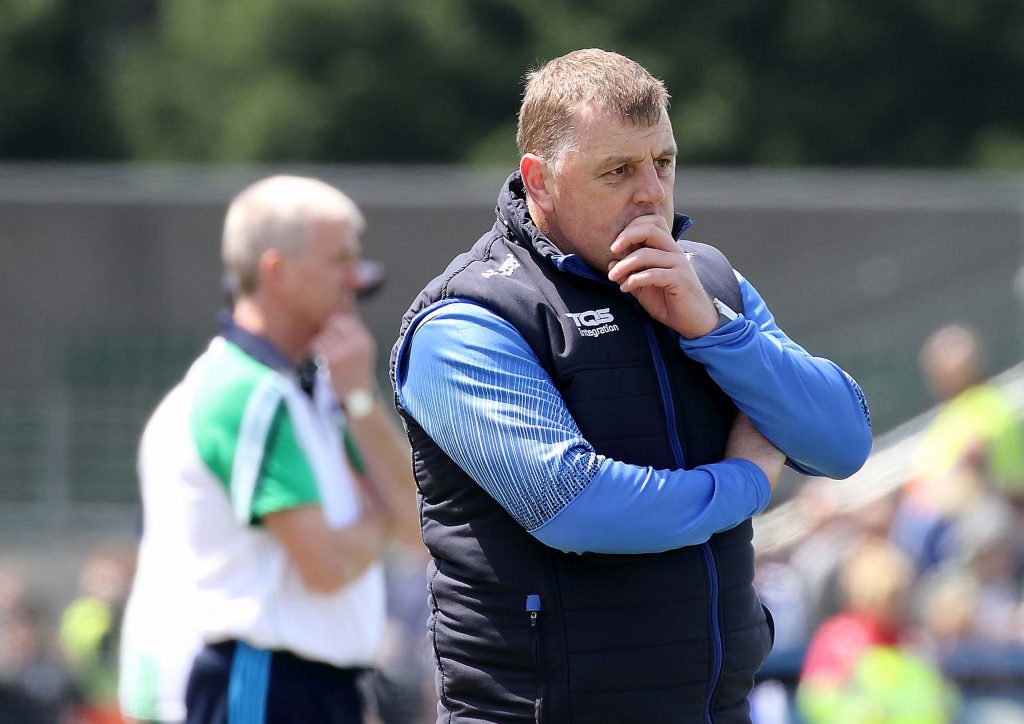 Paraic Fanning continued: “We started well and the lads were sticking to the plan fairly well in the first half until the goal, I suppose, and that’s happened us a couple of times; it’s another high ball that went up like the Clare goal the (last) day here, they picked up a breaking ball again and that’s disappointing for us. It’s just an unforced error from our point of view but look, there’s more to it. That gave them the foothold and they pushed on and we, again, got a little bit too deflated too quickly after that…and obviously after a game like that, there’s lots of things you’d be disappointed with. There’s also, believe it or not, some lads who actually came out of it really, really well and some really good things, it was encouraging to see some of the younger lads who kept going and battling…that was a difficult game, nobody wants to end up in those situations.”
When asked was he happy with Waterford’s second half effort, Paraic Fanning replied: “Whether it was on the back of the Tipperary game when we were outnumbered in the last 15 minutes that that goal deflated us there and I think we got a little bit deflated a bit in the second half again, too quickly maybe at times…whether that’s mental or whatever that is, that’s probably something you have to look at…it definitely got in on the lads alright at that stage.”
Austin Gleeson was withdrawn at half-time purely on form, Fanning confirmed. “I just didn’t think he was getting on the ball in the first half. I think in terms of possessions in the first half, their midfielders had 24 and we had eight…they’re calls you make…and we were changing tactics a little too probably at that stage.” As was the case a year ago, Waterford face into a final round clash with Cork with nothing other than pride to play for.
“We’ve got to regroup during the week. And in fairness to the lads they were in this situation last year again and we do have to now go and try and regroup for that game and get ready for it. What way we’ll approach it? We’re just in there with the lads at the moment just having a chat about, generally, a quick review of that and then looking at how we’ll approach the next week. Every game we play, for myself, it’s not in my nature to go out and not deliver so we’ve another big game next week that we have prepare as best as we can for and see what happens with it.”
As for why Limerick are such difficult opponents, Paraic Fanning stated: “Well, they’re All-Ireland champions and that’s probably a good enough reason for me. They’re a decent team. All teams at this level of the Munster Championship are difficult opposition. We’re difficult opposition as well; we probably haven’t had it shown it today or even the last day at times but that’s the reality. Limerick are a very slick outfit as I said after the League Final; we started well today but we petered out of it again a little bit of it…I think we started quite well, it’s just disappointing the way probably one or two little things went against us. We got a little bit deflated because of it, possibly we should deal with that a bit better at times. I wasn’t expecting a big backlash, I was expecting ourselves too to be delivering a fairly serious performance. As I said, I thought we started okay, we shot three or four bad wides ourselves early on in the first 15 minutes or so…look, as I said, when pressure comes on, sometimes you make decisions that, you know, aren’t quite what your normal game plan (would be), to try and dig something different and that happened maybe a little bit today.”
As for Limerick manager John Kiely, he was pleased his team got back to winning ways in the wake of their opening round defeat to Cork. “I know the calibre of the guys we’re working with,” he said. “The disappointment of the defeat to Cork was really difficult. We just didn’t perform on the day and that’s the bottom line and we had to respond today. If we didn’t, it was going to be curtains for us so it was a good response. We’re back on an upward curve again. We hit a lull in our form obviously given the performance against Cork so we have to try to get back up to the heights that we know we can get to, but it’s a journey and we’ve a lot of work to do still.”
When asked what the difference was between this display and the defeat to Cork, Kiely stated: “The first game is always difficult. Coming into it, maybe we would have liked to have had another game or two coming into it but it’s hard to get challenge matches at this time of the year but the bottom line is that we weren’t right on the day. The boys have shown that they have plenty of appetite for it and who knows what it will come down to yet. That’s just two points in the board for us and that’s all that matters. There were two points going for us today and there’ll be two points going again next week (against Clare). We’ll have to regroup really quickly, get our recovery in and make sure we’re in the best shape we can be for next weekend.”