Home » Sports » GAA General » Fanning: “We have to regroup for Tipp.”

Fanning: “We have to regroup for Tipp.”

“Ah sure, very disappointed,” was the natural first reaction offered by Paraic Fanning in the wake of Waterford’s one-point Munster Hurling Championship reversal to Clare on Sunday last.“We really, really came strong in the second half there and we had a few chances we didn’t take; there were one or two frees that didn’t go our way either but look, we’ve got to deal with it now. There’s one game down, there’s three games to go and if we win the next three games then we’ll be in a strong position; that’s the way it has to be now, we prepared for this situation too.”
As for where Waterford came up short on Sunday, the Déise boss didn’t quite see it in those terms but offered the following assessment. “We got caught in possession a few times; our use of the ball at times wasn’t something we’d be happy with. I think we improved a lot in the second period on that but look, I’m talking now immediately after the game, we’ll be looking back at the video in due course but we have to regroup now and get ready for next Sunday.”When asked about Clare’s first half physicality, which saw his medical team regularly called upon during the Banner’s most dominant phase of the match, the Waterford manager felt there wasn’t “much difference” between the sides. “I thought we were coming really strong in the last 20 minutes if anything so I thought we were more than a match there. There were probably one or two things we probably deserved a little more out of that we didn’t get but that’s the reality, that’s it.” 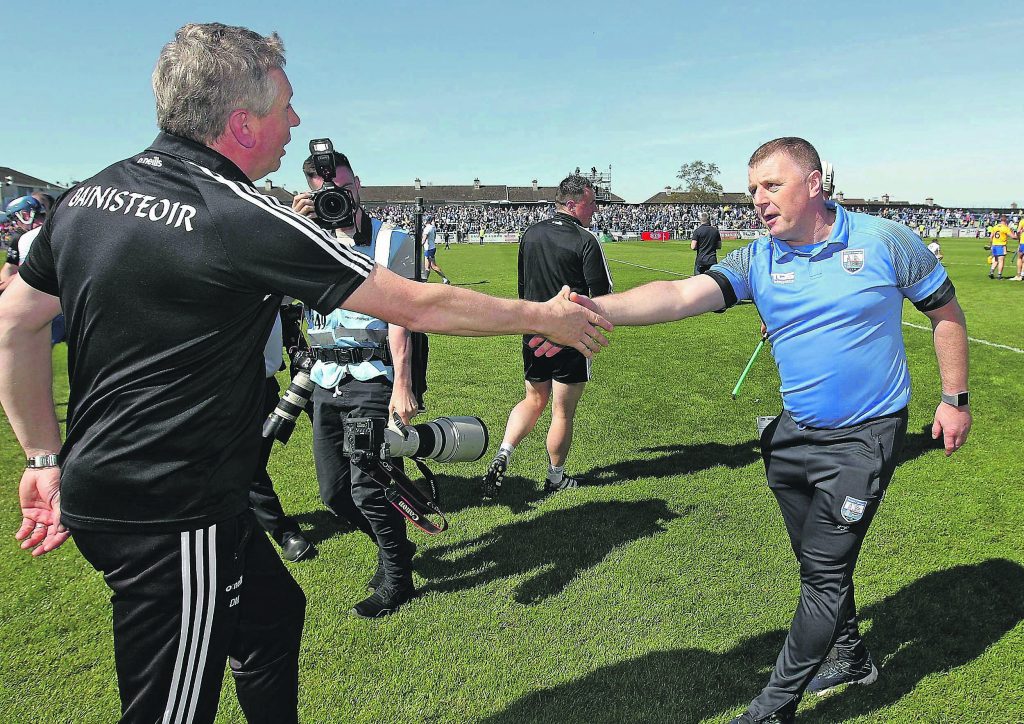 Did Paraic Fanning feel one too many close calls went against his charges? “Ah look, there are always 50/50 calls, I’m sure it was the same down at the other end and you deal the cards you get on those.”Part of Waterford’s second half resurgence was surely owed to Fanning’s use of the bench, with Maurice Shanahan roaring into contention, scoring a fine point, as did fellow replacement Tommy Ryan, while Shane Fives brilliantly deputised for Noel Connors.
“We lost Noelie very, very early, unfortunately and that meant a big reshape very early on for us; Shane has been out for a while but came straight back into it and played really, really well there,” said Paraic Fanning.“Maurice and, to be fair, I think all the subs that came in made an impact and that’s what you need your bench for. And again, and we said this to the lads there, we have lads who didn’t make the 26 today who are going to be there or thereabouts going into next week too. We’ve Tipperary coming up next, it’ll be interesting to see how it goes; we’ll have a look at the (Tipp/Cork) game this evening and we’ll prepare for that. What was it, a point in it at the end? It’s Munster Championship, I think it could have gone either way. I thought that once or twice in the first half we had a couple of really good chances that we didn’t take too.”
Did he feel that some of his starting forwards somewhat struggled in the opening 35 minutes? “I think at different points of the game there were different players not getting to the level that they wanted but that happens in matches, I wouldn’t use the word ‘struggled’…and I’m just disappointed that some of the things we spoke about that we didn’t carry out. But I’m never disappointed in our players, the lads give everything every time they’re out on that field…it’s a high intensity game. There were times when Clare spilled ball as well, everybody was going after it and you’re trying to close down options, you’re not going to get as much space out there and that’s it, that just happens. You make decisions on the field, sometimes they’re the right ones, sometimes they’re not but that’s it – you’ve got to be brave and make the decision.”Commenting on the Walsh Park atmosphere, the manager stated: “I thought it was great. I thought the atmosphere all week was great and of course we’re disappointed that we didn’t give people the chance to be that little bit happier in the morning but we’ll try and make up for that over the next week or so.”
Does defeat make next Sunday in Semple a must-win for Waterford? “Every game in the Championship is a game you feel is a must-win, so right now, where we are, and I’m not going to talk about winning or losing next week, we’ve a game next Sunday and it’s a game we want to win and it was the same with this game today, it was a game we wanted to win but if we won the first game today and lost the next three, we’d be out of the Championship. If we lost the first game today and win the next three, we’d be well in the Championship or the next two, there were teams went through last year winning two…you can get very, very bogged down on must-win games. Every game is important.”
Joint Clare Manager Donal Moloney wasn’t in the least surprised by Waterford’s gallop down the stretch.“Of course, they were going to come strong, it’s their home patch,” he stated. “I’d like to think if the situation was reversed and it was up in Ennis that we’d throw the kitchen sink at it as well. If the ball doesn’t stick at one end, it’s back in your square before you know it. Waterford have some tremendous quality; they have absolutely tremendous players. The last time we were here in March they gave us a hiding.”On the venue and its surface, Donal Moloney added: “Full credit to (the) Waterford (County Board), this place deserves to hold Munster Championship matches, and I’d say that irrespective of the result today.”