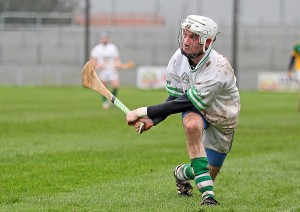 The outstanding Ben Gallagher bisects the posts for Fenor with a sideline cut in the closing minutes of their Munster JHC semi-final win over Ennistymon at Walsh Park.

The hurlers of Fenor strode into the Munster Junior Hurling Final (where they’ll face Cork’s Dungourney on December 6th in Mallow) following a comprehensive nine-point victory over Ennistymon at Walsh Park on Saturday last.
On a heavy surface which had benefitted from the strong winds which blew throughout Friday, Stephen Sullivan’s side made much the better of the elements and also produced a fine brand of hurling to boot.
Ben Gallagher, who converted eight points in total, opened the scoring with a free after 61 seconds, and he doubled his side’s advantage with a second free in the sixth minute.
Two minutes later, full-forward Conor Rockett brilliantly caught a deep ball and swung a fine effort over the crossbar – just – as the ball struck the rear of the crossbar and bounced back into the square. But the score, of course, legimitately stood.
Ennistymon’s first foray inside the Fenor half after eight minutes ought to have yielded a goal, but Enda Ralph shot wide from point blank range having darted past centre-back and skipper Jim Halley. Three minutes later, that miss was compounded was Mikey Nicholls’s fine ‘gather and strike’ point to send Fenor four clear. Within moments, the Clare side finally got off the mark through Liam Tierney before nine minutes elapsed without a score, finished by Ben Gallagher, but engineered by Ciaran Kirwan and Mikey Nicholls.
Two minutes later, Gallagher’s well-struck shot flew a foot wide of Cathal McDonagh’s left-hand upright, yet from their very next attack, Fenor found the green flagged target thanks to Sean Cheasty, after Conor Rockett and Mikey Nicholls combined brilliantly in the build-up.
By now, Fenor were rampant, and the white-hot Gallagher landed another teriffic point, his fourth of the half, to send the men in white eight points clear. And he repeated the feat two minutes from the break, galloping down the left flank to bisect the posts brilliantly.
And while Liam Tierney, having missed two successive frees, found his range from an outrageous angle wide on the right in stoppage time, Ennistymon went in eight points down at the break and requiring everything to fall in their favour thereafter.
Despite having the wind in their faces – if anything it picked up during the second half – Fenor retained their composure and registered a further 1-4, while Ennistymon tagged on 0-6 in a much improved showing.
But, due in no small part to the teak tough Donal Kelly and Jim Halley, and with the recalled Ray Hennessy in fine form between the sticks, Fenor limited their opponents to just 0-4 from play over the hour.
Michael McDonagh opened the scoring just 30 seconds in, but when Sean Cheasty smashed home his second goal in the 33rd minute, seizing onto Anthony Kiely’s deep delivery, Fenor were effectively home and hosed. A McDonagh 65, two Tierney frees and a Padraig Brennan point left just the two goals separating the sides by the three-quarter mark, but Fenor never came close to derailing.
Bolstered by the introduction of substitute Ollie St John, Gallagher added a brace of frees in the 47th and 50th minutes before Liam Tierney landed his second free of the afternoon.
Fenor were determined to finish on the up, and that they duly did, with St John brilliantly pointing after further measured build-up play from Niall Hennessy and Ciaran Kirwan.
But Gallagher, replicating his County Final party piece, sent a stunning sideline cut between the posts from beyond the 45-metre line, drawing rich applause from the 312-strong crowd. Liam Tierney registered the final point of the afternoon in injury-time but there was no denying the extent of Fenor’s victory and the quality of their display.
Fenor: Ray Hennessy; Fergal Whelan, Donal Kelly, Luke Middleton; Peter Kelly, Jim Halley, John Flynn; Anthony Kiely, Niall Hennessy; William Cullinane, Ciaran Kirwan, Ben Gallagher; Sean Cheasty, Conor Rockett, Mikey Nicholls.
Scorers: Ben Gallagher (0-8 0-4f, 0-1 Sl), Sean Cheasty (2-0), Conor Rockett, Mikey Nicholls and Ollie St John (0-1 each).
Substitutes: Anthony Whelan for Peter Kelly (44 mins), Ollie St John for William Cullinane (48), Flannon Cleary for Conor Rockett (56), David Sullivan for Anthony Kiely (59).
Ennistymon: Cathal McDonagh; Cathal Frawley, Michael Devitt, Brendan Hogan; Adam Ralph, David Davenport, Joseph Rynne; Liam Devitt, Michael McDonagh; Cristoir McCaw, Enda Ralph, Padraig Brennan; Liam Tierney, Aidan Slattery, Tony Malone.
Scorers: Liam Tierney (0-5; 0-3f), Michael McDonagh (0-2; 0-1 65) and Padraig Brennan (0-1).
Substitutes: Liam O’Driscoll for Cathal Frawley (41 mins), Thomas Griffin for Cristoir McCaw (48), Colin O’Driscoll for Liam Devitt (52), Kieran Harvey for Joseph Rynne and Derek McInerney for Tony Malone (both 58).
Referee: Philip Kelly (Tipperary)