Thomas Keane previews the first round knock-out games in the County Senior Hurling Championship
Roanmore v Ballyduff Upper
(Fraher Field, Saturday, 6pm)
This opening game in the first round of knockout games in the Senior Hurling Championship see two sides from opposite ends of the county clash in the first of three games to be played in Fraher Field this weekend.The city side will go into this game as the warmest of favourites to reach the last eight of the competition and with respect to the side from the west of the county it would be hard to argue with those setting the odds.Any side that comes up against Roanmore, regardless of how good they are, will know that they will not have an easy game.In the last few years they have made a great deal of progress and have some excellent young players coming through.Ballyduff are a side that have become more accustomed to being involved in a relegation battle rather than competing for a place in the latter stages of the championship in recent years, but in such games they are very difficult to beat and even if they lose out here, they still stand an excellent chance of retaining their senior status.On paper it is hard to see anything other than a Roanmore win in this game, but Ballyduff won’t let them have it all their own way.
Tallow v Passage
(Fraher Field, Saturday, 7.30pm)
Of the two games due to take place on Saturday evening this one is the one that could well generate the most interest.Ballygunner have dominated the scene at this level in the county in recent years contesting seven of the last eight finals, but both Passage and Tallow have proven to be amongst their biggest rivals in this time, both reaching two finals each, with Passage recording their only championship win in 2013 when they beat their neighbours at Walsh Park in a day never to be forgotten by many.Although there have been changes to both sides since they last appeared in a final, they remain strong sides and whoever advances for this match will certainly put it up to whoever they meet in the next round.Passage somewhat disappointed in the group stages winning just one game, a 2-17 to 2-13 win over Ballyduff in the opening round of fixtures, while Tallow in a very tough group also finished with just the one win, that a 2-19 to 1-14 win over Clonea.Results in the group stages suggest that this could be a game that will go right to the wire, and it would not be surprise if the game was not decided in the hour.Passage gets the nod to advance. 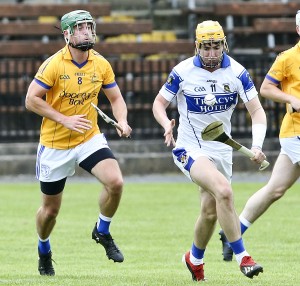 Mount Sion’s Martin F O’Neill with the sliothar against Fourmilewater’s Seamus Lawlor in the last of the group games at Fraher Field. Photo: Séan Byrne

Mount Sion v Clonea
(Walsh Park, Sunday, 2.30pm)
This the only game to be played at Walsh Park could well prove to be one that could attract a fair deal of interest, both from the locals and neutrals alike.Clonea did extremely well last year well to win a very competitive intermediate championship in the county and acquitted themselves well in the Munster Championship, recording a very good win over Limerick side Garryspillane before losing out to Feakle from Clare in the semi-finals.They performed well in the group stages even if they didn’t win a game, and if they can replicate the form they showed late last year they could well prove to be difficult for any side to beat.Mount Sion in the group stages did well, finishing with two wins from their three games, their loss coming against last year’s runners-up Abbeyside and this will give them plenty of confidence going into the knockout stages of the competition.While many would love to see last year’s Intermediate Champions advance to the quarter finals, you can’t but feel that the Monastery Club side if they can play as well as we know they can, should have enough in them to advance.
Dungarvan v Fourmilewater
(Fraher Field, Saturday, 7pm)
This is the last of the four games down for decision this coming weekend and is another that could well attract a big interest to Fraher Field, and could well go right to the wire.Fourmilewater disappointed somewhat in the group stages of the competition losing all three games, but this is something that they will not be over worried about as they knew regardless of the result in the three games played that they would be in the knockout stages of the competition.On their day the Ballymacarbry outfit are a match for most and with players like Conor Gleeson and Jamie Barron in their ranks as well as a number of other players who have played for the county at different levels are a side that nobody will find it easy to get the better of them in a knockout game.Dungarvan won two of their games in the group stages and although they finished with a very healthy score difference they missed out on an automatic place in the quarter finals.While many expect Ballygunner to win a sixth final in a row this year, there is a feeling that Dungarvan could be the side that pushes them hardest.Expect little to separate these two sides with Dungarvan advancing to the last four of the competition.