All-Ireland Intermediate Camogie Club Semi-Final
Gailltir v Clonduff
(Sunday, Clane 2pm)
Gailltír head into next Sunday’s semi-final determined to avenge last year’s defeat at the hands of Clonduff and reach the All-Ireland Intermediate club final for the second year in a row. Last March on a freezing cold afternoon when games all over the country were called off, the ladies from the Barony of Gailltir and Clonduff, Co Down battled against each other in the All-Ireland Intermediate Club Final in Croke Park.
Often it is photographs of the winning side that are remembered, posted across the National Media as on Social Media, but most will remember this game for a photo taken of Gailltir goalkeeper crouched down on her goal line wrapped up well from the cold knowing that she would not be doing the same running as her teammates to keep warm.
She had in her hands a hot water jar between her hands, taking the opportunity to keep warm while the ball was at the other end of the field and out of danger. 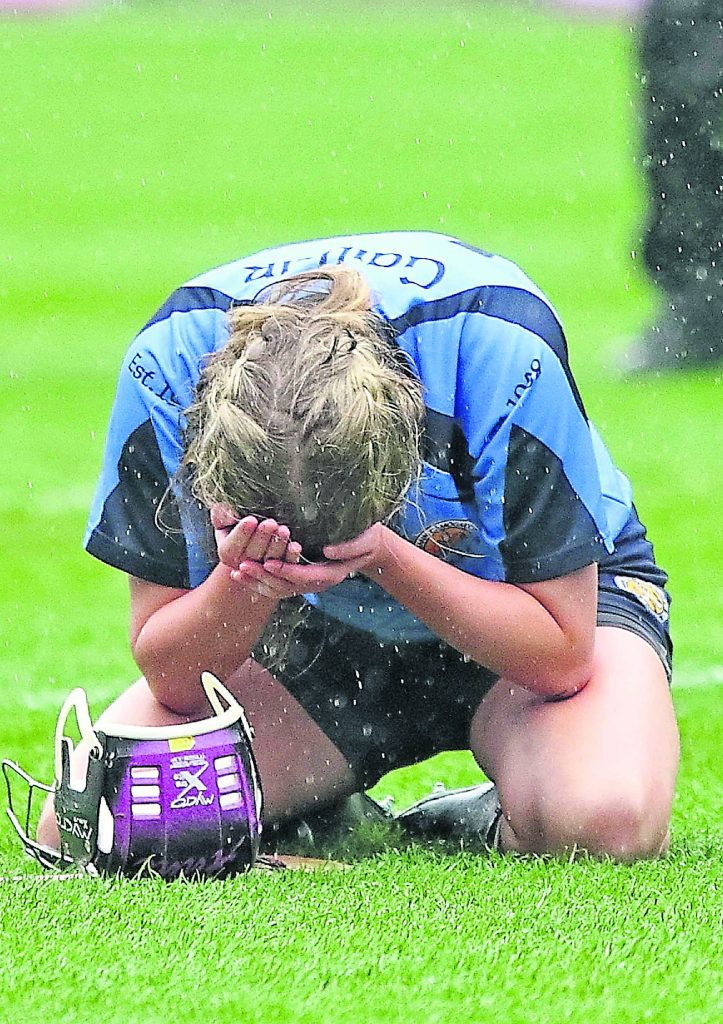 The heartbreak and devastation experience by Gailltír after last year’s All-Ireland final should be motivation enough ahead of the rematch against Clonduff next Sunday. Photos: Noel Browne

Gailltír were celebrating their 60th anniversary and victory would have capped a wonderful year. However, it was not to be as they lost out by a single point, 0-10 to 0-9.
A single point defeat can be so hard to take and it takes a good team to bounce back.
Gailltir might not have returned home with silverware last March but they did return home a much hungrier team than they were before the defeat. Since losing out to the Down side Gailltir have been nothing short of outstanding in all they have done.
Right now you have to wonder is there a stronger club in the country.
Right through the grades Gailltir are exceptional. They are producing players of the highest quality for the different inter county sides, and many of their teenage players are very active on the secondary school front, with a number of players the proud holder of county, Munster and All-Ireland medals at different levels.
While Gailltir have come back a better and hungrier side than they were last year they won’t travel up the M9 on Sunday morning next underestimating their opponents.
They won’t need any reminding that their opponents are All-Ireland Champions and it is only good sides that get to call themselves All-Ireland Champions. They will be looking to the likes of the Carr sisters Fionnuala and Sarah-Louise who will fill key positions for the Ulster side, but even if they manage to keep a close eye of these two and limit what they can do there is the likes of Paula Gribben in the middle of the field to cope with and Erin Rafferty in defence.
While Gailltir will know what a threat that Clonduff are, the Down side will know exactly how strong Gailltir are. They will know that in the Jackman sisters Ciara in goal and Trish, who commutes between Ireland and the UK, the experienced pair of Emma Roche and Áine Lyng who captains the side, the Fitzgerald’s (Shauna, Annie and Aoife) as well as rising stars like Kate Lynch, Clodagh Carroll, Ciara O’Sullivan, Emer Walsh, Hannah Flynn, Anne Corcoran that they have the ability to win this match.
There is no silverware on offer this time around, but for the winners there is the chance of All-Ireland success next month. Some might argue that Clonduff, as the victors when the sides last met, should go into this game as favourites but not me.
Gailltir are very hungry for success and no doubt this will show when they take to the field on Sunday afternoon. For me Gailltir are good enough to come out of this game as the victors and set up a Croke Park date against Galway’s Carnmore or Offaly’s Saint Ryanagh’s. the side that Gailltir beat in last year’s semi-final.