Jack Kennedy Memorial Division One Cup Final
Glór Na Mara Primary School (Tramore) 3
Holy Cross National School (Tramore) 1
There was a very special atmosphere in Graun Park on Wednesday last for this unique clash between the neighbouring Tramore schools in the annual Jack Kennedy Cup Memorial Cup Final. A large gathering of supporters from both schools allied to parents and mentors turned the seaside venue into a Theatre of Dreams and following the 60 minutes of action, which was played under delightful June sunshine, it was the Glór Na Mara players who walked away with the bragging rights and the coveted Jack Kennedy Cup.
The majority of the Tramore AFC Under 13 A team were on show (for both sides) and that gave this clash even more lustre. 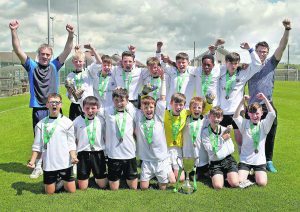 Glór Na Mara opened up brightly and Zac O’Sullivan had a low shot saved by Leon Murphy after eight minutes.
One minute later O’Sullivan was denied by Murphy once again. The pressure continued to mount from the team decked out in white and Jim Brennan was unlucky to see his angled shot from the left go narrowly wide of the back post on 13 minutes.The Holy Cross players began to settle into the game after that scare and Callum Barry was prevented from scoring by Glór Na Mara goalkeeper Ciaran Shanahan after 15 minutes. Leon Murphy came to the rescue of Holy Cross when he turned away a cracking drive from Zac O’Sullivan after 19 minutes and shortly afterwards Jim Brennan was just off target with a well struck free-kick from 20 yards.
It looked as if the teams would go in level at the break but the game was turned on its head on 28 minutes.
Zac O’Sullivan took control of the ball 25 yards from goal and his audacious cheeky dipping shot sailed over the head of Leon Murphy and the ball nestled in the roof of the Holy Cross net.
Glór Na Mara continued to press forward after the change of ends and Zac O’Sullivan almost scored again on 33 minutes after an excellent pass from Darragh Poyner but the ball went inches over the crossbar.
However Glór Na Mara increased their advantage after 38 minutes when Jim Brennan raced forward to meet a through ball from Zac O’Sullivan and coolly slotted the ball past the advancing Leon Murphy.
The Holy Cross team had a mountain to climb at that stage but they were handed a lifeline on 46 minutes whenBrandon Clifford handled inside the penalty area. Tommy Fanning took the resultant penalty kick but Ciaran Shanahan dived to his left to produce a brilliant save. Three minutes later however Holy Cross did get back into the contest when Callum Barry touched home a free-kick taken by Nathan Power.
The Glór Na Mara skipper Jack Ahern then hacked the ball off the line when it looked as if Alex Gillane was going to level matters on 54 minutes.
Glór Na Mara clinched the victory after 56 minutes. Sean Fitzgerald was adjudged to have fouled Jim Brennan inside the 18 yards box and Sean O’Donoghue gave Leon Murphy no chance from the 18 yards spot.
Waterford FC goalkeeper Matthew Connor presented the Jack Kennedy Cup to the Glór Na Mara captain Jack Ahern amidst scenes of great excitement . Zac O’Sullivan was named Man of the Match.