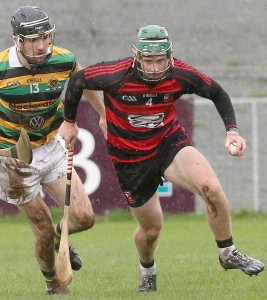 Ian Kenny has formed part of a formidable Ballygunner defence which has stood tall throughout this momentous campaign. They'll need to do again in Sunday's Munster Club Final against Na Piarsaigh at Semple Stadium.

Should Ballygunner do what they’ve only done once previously and become Munster Senior Hurling Club champions on Sunday next in Semple Stadium when they take on Na Piarsaigh (2pm), they’ll certainly have succeeded the hard way.
Without the retired Alan Kirwan, the transferred Wayne Hutchinson, the injured Pauric Mahony and his suspended brother Philip, sent off in the semi-final win over Glen Rovers, the Gunners are still standing.
And with question marks over Peter Horgan’s hamstring (“he’s young so we’re hoping he’ll be fine for Sunday,” said manager Denis Walsh, there’s no doubting Ballygunner right now are not as strong as they were 12 months ago.
However, their season was mothballed a year ago when Cratloe sent them out of the provincial series at the semi-final stage, so perhaps us hurlers on the ditch are being a touch harsh on the current vintage.
In the wake of a sensational second half display against the Glen, whom they blitzed by 0-16 to 1-12, all achieved minus Peter Hogan and Philip Mahony, Ballygunner found a gear they’d not reached in their 2015 campaign.
Theirs was a marvellously full-blooded effort, and to hurl with such quality and power in ploughing match-like conditions may well go down in legend, all the more so if they get the job done in Thurles.
And should they strike that type of form again, then it would take one hell of a team to stop them either next Sunday or, fingers crossed, come the All-Ireland series.
Na Piarsaigh. Still unbeaten in Munster Club Championship hurling, and with a penchant for powerful finishes, as they’ve already demonstrated against Patrickswell, Sixmilebridge and, on Sunday last, Thurles Sarsfields, whom they defeated by 2-15 to 0-17.
En route to their brace of provincial title successes in 2011 and 2013, they felled Deise opponents – Passage in an epic semi-final in Limerick two years ago – and, of course, the Gunners, whom they blitzed with three goals to overturn a six-point half deficit.
That Walsh Park defeat stuck in the Ballygunner gut: to let a six-point slip, shell three second half goals, with Shane Dowling’s 2-4 haul sealing a famous win for the sky blues.
Teams love nothing more than cause – and Ballygunner have theirs in the guise of that match, another of those ‘one that got away’ provincial defeats.
Sunday’s trip to Tipp marks the Gunners’ eighth Munster Final appearance. That they’ve only won one of those previous seven showpieces represents massive underachievement.
The team that got across the line in 2001 remains one of the finest club sides to ever emerge from this county, but I’m sure they’d love a spot of company up on that perch.
“The lads cut loose against the Glen,” said Denis Walsh. “It’d be great to see them reach that level again – and if they do that on Sunday, then they’ll be in with a decent shout.”
The Gunners fly white and blue as well as red and black this Sunday. They’re playing for all us, just as Fenor will do come the December 6th Junior Final (see Sport 5). So go on, lads, Bring it home.