Waterford FC 1 Bohemians 0
Waterford FC made it two wins in the space of four days when they defeated Bohemians at the RSC on Monday week last.
The previous Friday the Blues scored a last minute goal to beat Sligo Rovers at the Showgrounds 2-1 and at the RSC they scored the only goal of the match to rock the ‘Gypsies’ from Dalymount Park in front of a crowd of 2,300.
Sander Puri, who had replaced the injured Bastien Hery for the second half, was the goalscoring hero in this match.
He was only on the field for six minutes when he touched the ball to the net. It was an emotional night for the Estonian international. Not only was this his first goal for the Blues but he dedicated the goal to his dad Raul who sadly passed away during the Christmas period. The win kept Waterford joint top with Cork City who required a penalty kick to defeat Shamrock Rovers in Turners Cross on the same night. 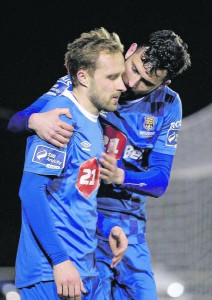 . An emotional Sander Puri is congratulated by his Waterford FC team mates after scoring the winning goal against Bohemians, It was his first goal in the league and an emotional moment as he dedicated the goal to his late Dad Raul who passed away before Christmas.

Courtney Duffus created the first chance inside two minutes when he found space out on the right-wing but blazed horribly wide.
Oscar Brennan got free inside the area to meet a Dylan Watts delivery soon afterwards, however Kenny Browne blocked his header.
On 21 minutes Watts turned provider for Robert Manley but Dave Webster got back in the nick of time to get a vital touch on the ball.
Gavan Holohan had a great chance to give the Blues the breakthrough goal on 29 minutes when he got free at the back post and met a cross from Stanley Aborah but Holohan’s effort went straight into the hands of visiting keeper Shane Supple. 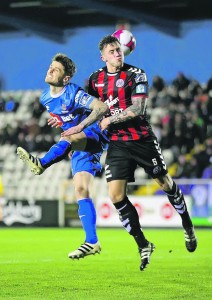 The Blues had one final chance of the half when Aborah chipped the ball into the path of John Kavanagh but his cross turn shot just cleared Supple’s crossbar.
Substitute Sander Puri broke the deadlock six minutes into the second half when he bundled Courtney Duffus’ deflected right-wing cross to the back of the net from close-range.Holohan had a chance to stretch the lead on 54 minute but his shot was just inches wide of the right-hand post. Courtney Duffus fired in a shot on the run soon afterwards, however Supple got down well to save.Holohan sniffed out another chance for himself on 69 minutes but his low shot was saved by Supple as the hosts tried to find the second goal to put the tie to bed. Bohs created an opportunity to level on 76 minutes but Eoghan Stokes headed straight at Lawrence Vigouroux and Keith Ward played a short corner kick to Dylan Watts seven minutes from time but his tremendous volley whistled inches off target as the hosts held out for another big win on home turf.