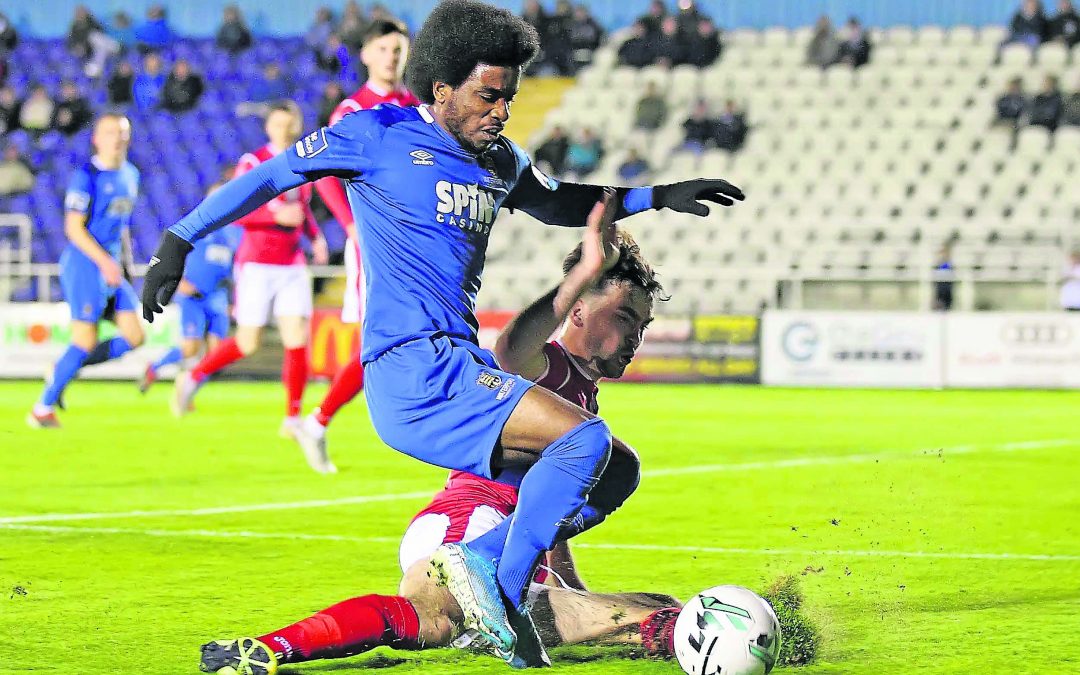 League of Ireland Premier Division
Waterford FC 2
Sligo Rovers 0
Waterford and Sligo Rovers met for the fourth time this season when they clashed at the RSC on Tuesday night last and after three previous draws the Blues came out on top in this encounter. This win moved the Blues closer to the ‘Bit O Red’ on the league table with just two points now separating the teams. There was just one change to the Waterford starting eleven from the team that defeated St Patrick’s Athletic the previous Friday. Georgie Poynton came in for Zack Elbouzedi who was away on Under 21 international duty with the Republic of Ireland.
Shane Duggan went close to opening the scoring on three minutes when he burst from midfield, but he fired a left-footed shot over the bar. 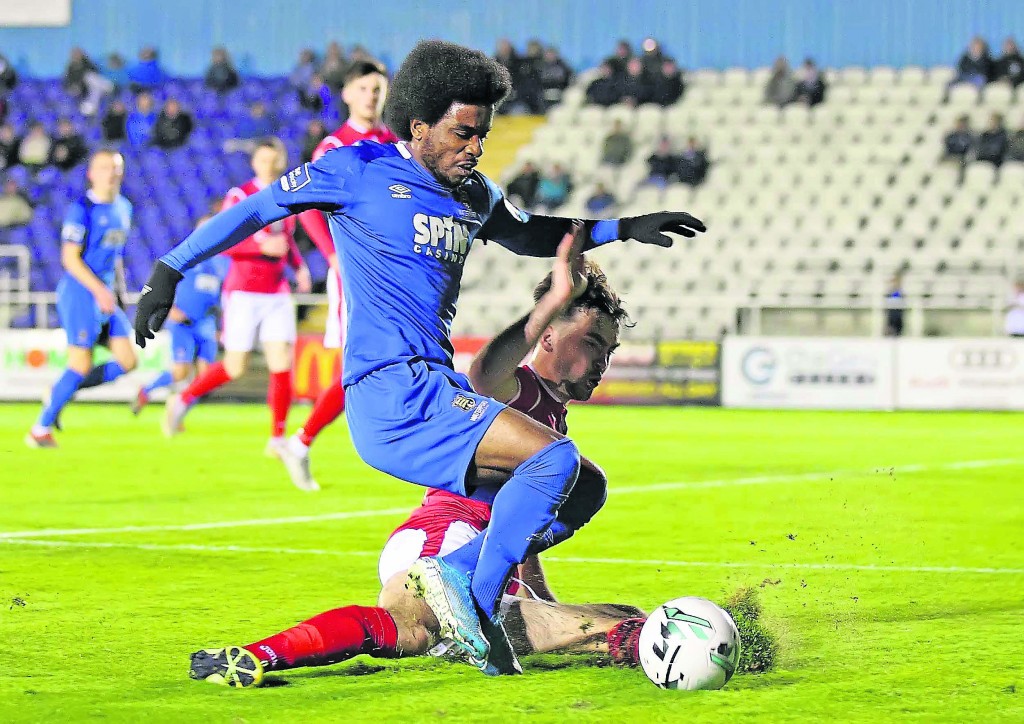 Waterford FC’s Walter Figueira is fouled in the first half by Sligo Rovers John Mahon which resulted in a penalty kick, unfortunately Michael O’Connor’s shot was saved.

Michael O’Connor, who scored a brace in the win at Inchicore, was off target with a header after a JJ Lunney delivery two minutes later.Waterford had a great chance to take the lead from the penalty spot on 16 minutes when assistant referee Trevor Cotter spotted that John Mahon fouled Walter Figueira on the endline, but O’Connor’s effort was kept out by Luke McNicholas.A minute later the Sligo netminder produced a good save from a Georgie Poynton free kick.
JJ Lunney was the next player to go close on 18 minutes when he headed a Kevin Lynch free kick straight at McNicholas. The Sligo keeper denied the home side once again on the half hour mark when he turned a Figueira shot around the posts for a corner kick.The Blues finally opened the scoring on 34 minutes when JJ Lunney whipped in a brilliant cross to Rory Feely and he powered an unstoppable header past McNicholas from six yards.
Waterford doubled the lead with the first attempt of the second half on 52 minutes when Walter Figueira’s second attempt, after his first effort was blocked, deflected off Regan Donelon and past Luke McNicholas.
Matt Connor produced his first save of note to keep his side in control of the game six minutes later when David Cawley slipped the ball to Brian Morley but his cracking effort was tipped around the posts.Sam Warde headed a free kick over the bar on the hour mark before Waterford did have a good chance to put the game to bed on 81 minutes when Walter Figueira took a pass from the brilliant Shane Duggan before trying his luck from 25-yards, but keeper Luke McNicholas tipped the ball superbly around the posts.
Man of the match Duggan should have got his name on the scoresheet in the final minute, but his goal-bound effort from deep inside the area was blocked out by Sligo defender Danny Kane.Waterford boss Reynolds brought on Under 19 player Darragh Power for his first team debut two minutes later as his side were happy to see out the game and with two games to go in the season away to Finn Harps and home to UCD, the target remains to try catch Sligo Rovers for sixth spot.