Kingdom Prove Too Strong for Waterford

Kerry 2-16
Waterford 1-6
Corner forward Sarah Houlihan produced a player of the match performance for Kerry at Fitzgerald Stadium on Sunday afternoon to knock Waterford out of this year’s Munster Championship.
Goals in both halves, the first from a Sarah Houlihan penalty on 24 minutes after she was fouled for the one on one kick and Andrea Murphy proved crucial in this game as they helped to pull the home side clear of a Waterford side that were refusing to give up without a fight.
Sarah Houlihan and Lauren McGregor swapped early scores before Michelle Ryan gave Waterford the lead with the help of Laura Fitzgerald who pushed the size four football over her crossbar. But it was the only time that Waterford led during the game.
Sarah Houlihan the only player to score for the home side in the opening half landed a brace of points before she slotted home a penalty six minutes from the end of the first half.
Eimear Fennell re-established a two-point lead for the reigning Munster Champions, and the Beaufort Club player would land another score before the break to give her side a 1-4 to 0-4 lead.
Kerry went on to land the first three scores of the second half, Houlihan twice putting the ball over the head of Gráinne Kenneally, with Emma Dineen hitting one in between to give the hosts a six-point lead. 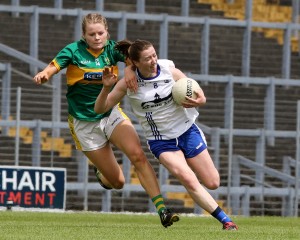 And when Andrea Murphy landed the next score, resulting in a green flag after a good attacking move, the game was as good as over for Waterford.
Houlihan would again score for the hosts before Aileen Wall kicked Waterford’s first score of the second half.
Andrea Murphy followed up with a brace of scores before Maria Delahunty, having come on to replace Katie Murray split the Kerry uprights.
Houlihan and Lorraine Scanlon hit a brace of scores each and Aoife O’Callaghan hit one before Waterford would score again, as Maria Delahunty found the net with a consolation score.
For their part, Kerry weren’t finished yet as Lorraine Scanlon struck home their third goal of the afternoon shortly before the final whistle.