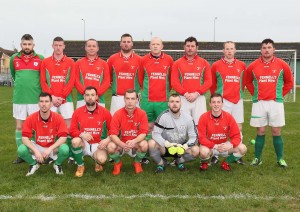 The Bolton team defeated by Ballinroad in the Munster Junior Cup

Ballinroad edge out battling Bolton
Bolton 0
Ballinroad 2
Ballinroad, who are chasing promotion from Division 1A edged out Bolton from Division 2 B in the Munster Cup on Saturday in Bolton Park.
The home side failed to take a number of good chances, especially during the first half and they really made the team from the west work hard for their victory.
Both sides gave their all in what was an excellent game between two committed teams.
The crossbar denied Bolton a dream start to the game on seven minutes when Kieran Kelly sent in a corner kick to the back post for Willie O’Reilly but his free header struck the woodwork with keeper Aaron Beresford beaten.
Michael Sweeney had a great chance to put Ballinroad in front less than three minutes later when the centre forward took a pass from Daniel McCarthy but the attacker blazed over the crossbar of Bolton keeper Anthony Kiely.
Ballinroad took the lead on 16 minutes when David Looby whipped in a corner kick from the left to the back post where Patrick Walsh was left totally unmarked to plant a header to the net from close range. 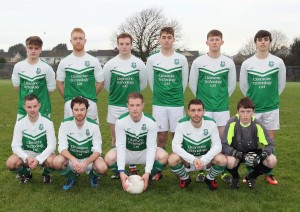 The home side should have levelled the tie on 34 minutes when they were gifted an early Christmas present when Nicky Dee put a clearance straight to Kieran Kelly but he blazed wide of the far post from the right side of the area with Aaron Beresford beaten.
Bolton had another great chance to bring themselves back on level terms less than four minutes later when Kelly played Joe Dwyer in on the right side of the penalty area but his angled effort was saved by keeper Beresford.
With less than a minute played in the second half, the hosts could have equalised when David Power whipped in a free kick from the right that found the head of Joe Dwyer but his towering header flashed inches over the bar.
Bolton were made to pay for those missed opportunities on 48 minutes when Daniel McCarthy sent over a free kick from the right that was knocked back across goal by Gavin Flynn and David Looby was on hand to fire past Anthony Kiely from ten yards.
That goal took the sting out of the game as Ballinroad looked comfortable at the back and never looked like conceding the goal that would have given the hosts a lifeline back into the game.
Micheal O’Neill could have added a third goal within two minutes of his introduction on 82 minutes when he took a pass from Gavin Flynn but his cracking left-footed effort came crashing back off the post with keeper Anthony Kiely beaten.
Bolton `keeper Kiely made a smart save to deny Richie Ryan five minutes from time before Gavin Flynn put the ball on a plate for David Looby on the stroke of full time but he blazed inches wide of the target.
BOLTON: Anthony Kiely, Derek O’Keeffe (Kieran Rice ’29), David Power, Paddy O’Reilly, Ray Carroll, Hughie O’Neill, Stephen Dalton, Jamie McDonald, Joe Dwyer (Rob Harse ’61), Willie O’Reilly, Kieran Kelly.
BALLINROAD: Aaron Beresford, Ben Mulligan (Peter Queally ’46), Anthony Fitzgerald (Sean Crotty ’46), Nicky Dee, Patrick Walsh, David Looby, Daniel McCarthy (James Kennedy ’72), Joey Veale, Michael Sweeney (Micheal O’Neill ’80), Gavin Flynn, James Coad (Richie Ryan ’72)
REFEREE: John Falconer