Senior Football Championship Group A
The Nire 2-3
Clashmore-Kinsalebeg 0-5
Mac Dara Mac Donncha Reports
Clashmore will be rueing last Thursday’s defeat at Fraher Field as they should have at the very least earned a share of the spoils. They kicked 11wides, including five – yes, five – by their freetaker until Tadhg De Búrca took over that role with some degree of success. Both goals that they conceded were in the ‘preventable’ category. The Nire were very flat last Thursday and there for the taking but Clashmore couldn’t avail of a golden opportunity to take advantage. 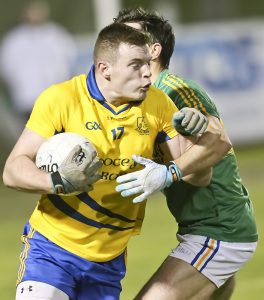 Despite a flat display which produced only 2-3, Dermot Ryan and his Nire team mates did enough to get past Clashmore at Fraher Field last Thursday. | Photo: Sean Byrne

Shane Walsh was one of the stars of the opening round and he continued this rich vein of form with a lovely point off his left foot, although slightly off balance, in the opening minute.
Twelve scoreless minutes followed before Ed O’Halloran equalised with an equally neat score off his left foot. By now it was clear that the urgency and work rate that The Nire showed against Ardmore in their opener, was lacking here.
Midfielder Dermot Ryan edged them in front once more on the quarter hour mark, with Tadhg De Búrca equalising three minutes later. In a most lacklustre opening half, we saw no more scores, with a series of wides – seven in all – hampering Clashmore’s chances .
The Nire’s opening goal came within 90 seconds of the second-half throw-in. A high ball by Shane Ryan was spilt by Fintan Walsh with Kenny brazil on hand to bundle the rebound to the net. In fairness to the Clashmore custodian, the lights had just been switched on and he may have been partially unsighted. We then saw another 13 minutes without any score, with two frees missed by Clashmore.
Eventually Tadhg De Búrca was given responsibility and from his first effort, in the 45th minute, he split the Nire uprights. He followed suit with a second two minutes later and how they must have regretted not having given him the task earlier! Nevertheless, they were back within a point, before Shane Walsh converted a free at the other end to double the lead in the 51st minute. Straight from the kick out, Tom Barron got possession, and slipped the ball to Shane Walsh who was upended in the ‘square’. Darren Guiry slotted the penalty which followed to the net and The Nire were undeservedly five points ahead. Clashmore never stopped trying, but found scores very difficult to come by.
All they could muster was an Adam O’Sullivan point in the 62nd minute. They have scored 0-9 in two matches so it’s quite clear where a major part of their problems lies, but it must also be recorded that they are short up to seven regulars.This match had an unsatisfactory undercurrent right through, with a number of players very fortunate to have remained on the field. A number of yellow cards really should have been of a darker hue. The Nire ended up with thirteen players, with Michael O’Gorman being awarded a Black Card and Darren Guiry a red for his second yellow-card infringement, both of these occurring in injury-time. Yes, it was sadly a continuation of the poor fare we saw in the first round of this Championship.