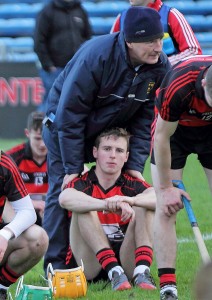 In the context of their superb second half display against Glen Rovers, Ballygunner were ‘Ballygunnered’ by a rampant Na Piarsaigh side who swept to their third Munster title in five years at an icy Semple Stadium on Sunday.
Outscoring the Waterford champions by 1-14 to 1-4 in a dominant second half performance, the Limerick club suggested that they will take some beating in the Club Championship between now and St Patrick’s Day.
As for the defeated Gunners, manager Denis Walsh admitted that Na Piarsaigh “moved up a gear and we didn’t respond to it at all”.
Walsh added: “We knew that, coming out for the second half that we had played well (in the first half) and we had played in that gear in the first half and probably should have been five points up by half-time as opposed to three.”
Conceding that he was disappointed “that we didn’t have a bit more on the board to show for our efforts by half-time,” Denis Walsh felt his side “had dictated the intensity of the game, but look, in fairness to Na Piarsaigh, they came out, turned things around and dictated the game. and it was up to us to respond to that, but we didn’t. And you couldn’t pinpoint it and put it down to two or three players – it was an overall thing.”
Yet it was difficult not to think about two, indeed, three players on Sunday last: long-term absentee Pauric Mahony, his suspended brother Philip and emerging talent Peter Hogan, whose hamstring problems curtailed his contribution in Thurles.
Despite the young talent at his disposal, any team would be the weaker minus such quality practitioners, all the more so in the case of the talismanic Pauric and his brother, who, for me, has been his club’s star performer this year.
On those absences, Walsh replied: “Well, yeah, but in fairness, Kevin Downes was missing and David Breen was missing for most of the game too for Na Piarsaigh so it’d be a poor excuse to use that one.
“But in the middle third of the field, where they (Philip and Pauric) would have been playing and in that 10 minutes after half-time, the experience to stand over a ball, take the hit and slow things down, that would have been crucial.”
Assessing the overall campaign, his first year in charge, Walsh bluntly stated: “We didn’t play any great hurling during the year, I would say, by general consensus. We were very professional and workmanlike and I think we’ve brought in a few players who have stepped up to the mark – we had five Under-21s starting today.”
The ultimate objective for the Gunners is to claim a third successive News & Star Cup next year, before they can spare a thought to improving on a Munster Final record that now reads seven defeats from eight appearances. The mighty men of 2001 continue to stand alone.
“Three in a row is the target now. The age profile doesn’t mean a whole lot if the lads don’t have the hunger and commitment for 2016, but that will be the first target we have in mind.”
* With thanks to Brian Flannery