A superb injury-time penalty save by goalkeeper Eddie Lynch saw Passage earn a Senior Championship Quarter-Final berth at the expense of Mount Sion, while Roanmore were left to settle for a seeded slot in the play-offs. On the driest Walsh Park sod in more than four decades, Lynch dived low to his left to divert away Billy Nolan’s firmly struck penalty at the end of a contest which featured some wayward shooting by both sides, contributing to a combined total of 25 wides. 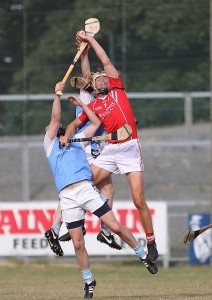 Dale Hayes opened the scoring for Roanmore after 14 seconds following fine support play from Frank McGrath and Eoin Madigan, with Thomas Connors responding with a fine score from wide on the right just a minute later. Hayes turned provider for Emmett O’Toole in the fifth minute, but Connors immediately replied with a converted free, and he repeated the trick two minutes later.
Killian Fitzgerald superbly fetched a high ball before landing a 10th minute point, by which time Passage had already registered four wides. Emmet O’Toole and Owen Connors traded frees in the 11th and 12th minutes to leave Passage 0-6 to 0-3 ahead, but a brace of O’Toole frees in the 14th and 16th minutes left just a point between the sides.
Sean Hogan, more or less standing in the area where he landed the last non-Ballygunner Championship-winning goal, saw his 17th minute shot saved by Billy Nolan, and the Roanmore keeper was next to score with a free struck from the halfway line to level the game after 23.
Owen Connors turned over a 65 for Passage barely a minute later, while referee Alan Kissane took no lip from either team over the course of game, during which he brought several frees forward by 13 metres due to dissent. Kissane over-ruled his umpires in the 28th minute when awarding a point to Emmett O’Toole to leave the Sky Blues 0-8 to 0-7 ahead at the break