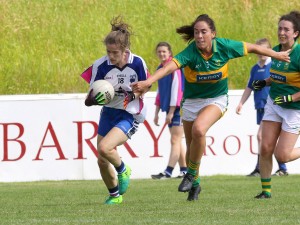 Waterford's Emma Murray is held up by Kerry's Amanda Brosnan

Three late points by Kerry helped the Kingdom Ladies capture this year’s Munster Senior Ladies Football title at Mallow on Saturday afternoon.
Both defences were well on top in the opening exchanges of this game which was the first meeting of the two sides in a provincial final since 2003.
Although defeat was Waterford’s lot on the day, Pat Sullivan and his side can hold their heads high knowing that they are moving in the right direction.
Despite this defeat they will go into the All-Ireland qualifier against Cavan or Laois in a confident mood, knowing that as a unit they have improved considerably since they met both sides in the National League during the spring, where they beat Laois and narrowly lost on their travels to Cavan.
The winners made a lot of early running in the early stages but for all their efforts they failed to hit any early scores as the Waterford management team had their homework well done on the side from the Kingdom and as much as possible forced them to kick with their weaker leg throughout the first half.
Kerry looked to have even been dealt a further blow when they lost Anna Galvin to a sin binning after just eight minutes, but while they were a player down over the next ten minutes, they worked extra hard in defence and restricted Waterford to just two points. The first of those points came from a Maria Delahunty free on twelve minutes after she was fouled and three minutes later Michelle Ryan kicked her first score of the game in a good move that began at the other end of the field with a Katie Hannon kick out and involved Caoimhe McGrath, Maria Delahunty, Aileen Wall and Katie Murray up the field.
Kerry responded with a point from Sarah Houlihan on sixteen minutes and a minute later Waterford were unlucky not to put the ball in the Kerry net but Róisín Tobin was blown for over holding before she had the chance to shoot.
Kerry hit the next four score through Louise Ní Mhuircheartaigh brace and one each from Lorraine Scanlon and Sarah Houlihan to go 0-5 to 0-2 in front with 23 minutes played.
The first goal of the game arrived a minute later when Grainne Kenneally was hacked down in the box and a penalty was awarded and when Katie Hannon ran up the field she had just one thing on her mind as she calmly slotted the ball into the bottom left corner of the goal as she looked to level matters.
Two further scores were registered before the break. Amanda Brosnan’s point was followed by a Maria Delahunty score following a foul on Grainne Kenneally to send the teams in at the break locked at 1-3 to 0-6.
Kerry had a good start to the second half with points from Lorraine Scanlon and Sarah Houlihan and kicked a third from a very controversial free again from Houlihan to go three in front.
Waterford were unlucky not to have hit a second goal on 36 minutes when Maria Delahunty hit the woodwork and from the rebound Katie Murray had her shot blocked.
Waterford scored a second goal on 41 minutes when Aileen Wall passed to Maria Delahunty who put the ball into the Kerry net using her hands.
But straight away Kerry cancelled out the Abbeyside players score with their only goal of the game through Sarah Houlihan.
Aoife Murray made it a two point game on 43 minutes but Louise Ni Mhuircheartaigh put a little further day light between the sides a minute later.
Michelle Ryan pointed for Waterford on 46 minutes and moments later Grainne Kenneally got her name on the score sheet when she palmed a Aoife Murray effort to the net.
Louise Ni Mhuircheartaigh and Maria Delahunty swapped scores with five minutes left with Waterford in front by one, but late points from Laura Rogers and a brace from Louise Ni Mhuircheartaigh were to prove decisive for Kerry.
WATERFORD: Katie Hannon; Kate McGrath, Caoimhe McGrath, Megan Dunford; Dearbhaile Ni hAodha, Karen McGrath, Michelle McGrath; Mairead Wall, Emma Murray; Róisín Tobin, Grainne Kenneally, Katie Murray; Aileen Wall, Maria Delahunty, Michelle Ryan.
SUBS:Aoife Murray for Katie Murray (41), Eimear Fennell for Róisín Tobin (45), Rebecca Casey for Michelle McGrath (57).
SCORERS: Maria Delahunty (1-3, 0-3f), Katie Hannon (pen), Grainne Kenneally (1-0 each), Michelle Ryan (0-2), Aoife Murray (0-1)
KERRY: Laura Fitzgerald; Eilish Lynch, Aislinn Desmond, Aisling Leonard; Denise Hallissey, Ciara Murphy, Caroline Kelly; Lorraine Scanlon, Emma Sherwood; Amanda Brosnan, Anna Galvin, Sarah Leahy; Sarah Houlihan, Louise Ni Mhuircheartaigh, Laura Rogers.
SUB: Aisling O’Connell for Sarah Leahy (27).
SCORERS: Sarah Houlihan (1-4, 0-1f), Louise Ni Mhuircheartaigh (0-6, 2f), Lorraine Scanlon (0-2), Amanda Brosnan, Laura Rogers (0-1 each).
REFEREE: Jason Mullins (Limerick).