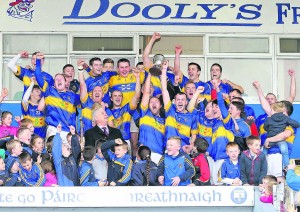 After a 10-year wait, including more than a little heartache along the way, the blue and gold of Portlaw has been restored to Senior Hurling Championship status following Sunday’s nerve-shredding victory over Modeligo at Walsh Park.
That it won’t be recalled as one of the all-time great tussles down Keane’s Road mattered not a jot to the team valiantly captained by Frank Galvin, who was deservedly named as man of the match on Sunday last.
This was all about winning, putting the pain of the heavy 2012 defeat to An Rinn firmly behind them and restoring a club which dominated the Senior Championship in the 1970s to the top table of Deise hurling. Mission accomplished for the side managed by Dick O’Shea.
On a heavy pitch under clouds weighed down by rain, Modeligo, minus inter-county player Tom Devine due to a reported hand injury, took the lead via a Jamie Troy free in the fourth minute. Two minutes later, Paul Power converted a 50-metre free to bring the sides level, with the experienced John Hartley edging Portlaw ahead in the ninth minute.
Within 90 seconds, Jamie Troy has restored parity and he further punished Portlaw’s indiscipline when firing over his third and fourth frees in the 13th and 16th minutes respectively.
Paul Power proved just as accurate from the dead ball as he brought the sides level at the end of the first quarter, only for Troy to cancel that effort out as a cagey affair was played out on a slippery surface. Portlaw corner-forward Blake O’Connor was illegally impeded come the 21st minute, as Power once more found his range before Tannery Town half-forward Shane Power sent Portlaw ahead a minute later.
But back came Modeligo, and a superb upfield solo surge by Patrick Walsh was equalled by the quality of his pointed finish to make it five points apiece with six minutes of the opening g half remaining,
Jamie Troy’s fifth free of the afternoon edged the green and white back in front, but Paul Power, demonstrating great strength down the right flank, rifled the ball high and true between Cian O’Byrne’s uprights.
Portlaw’s first real moment of quality yielded a superb point for John Hartley in additional time, after Blake O’Connor cleverly found the former Deise senior panellist in space down the right channel. At the break, Portlaw went in a point to the good, leading by 0-7 to 0-6.
The tension was cranked up after the interval, with Portlaw ultimately retaining their slender advantage. Three minutes in, Blake O’Connor’s shot from point-blank range was adjudged to have crossed the Modeligo line by the umpires after DJ Foran’s shot was blocked by Cian O’Byrne. But, less than a minute later, a fine point down the left flank by the excellent Patrick O’Donovan kept Modeligo firmly in the contest
DJ Foran, who put in a great shift off the ball on Sunday last, soloed and pointed in the 35th minute, and during the next 13 tense minutes would elapse, the sides yielded only a point each a superb O’Donovan sideline and another Paul Power free. Portlaw led by 1-9 to 0-8, and it was still all to play for.
Jamie Troy zipped a shot over Luke Power’s crossbar in the 53rd minute and when captain Patrick O’Donovan, despite losing his balance, landed a terrific 56th minute point, Modeligo had only two points to make up.
Portlaw, who hadn’t converted their greater levels of territory and possession into scores on the board, were on the ropes, they were bouncing off them when the inspirational O’Donovan pointed again with three minutes remaining.
But Portlaw, bolstered by some tremendous defensive displays by skipper Frank Galvin, Michael Donnelly and Jimmy O’Donoghue, found a badly needed second wind. A title-winning one, at that.
Christopher Mackey’s 58th minute pass played in Paul Power for a vital point, before Blake O’Connor, a rock of consistency all season, tagged on a marvellous white flagger from an acute angle down the right. Portlaw led by a goal once more.
And try as Modeligo might (remember, they were playing in the junior grade just a year ago), an injury-time point by wing-back Thomas Walsh was all they could add to their total. On the balance of play, Portlaw merited their title, kicking off a lively week in the village by the River Clodagh. This win was a long time coming. (See Sport 23 for more)
Portlaw: Luke Power; Shane Foran, Eoin Galvin, Michael Donnelly; Jimmy O’Donoghue, Frank Galvin, Gary Morahan; Jack Walshe, Niall Fitzgerald; Shane Power, John Hartley, DJ Foran; Blake O’Connor, Paul Power, Noel Mackey.
Scorers: Paul Power (0-6; 0-4f), Blake O’Connor (1-1), John Hartley (0-2), DJ Foran and Shane Power (0-1 each).
Substitutes: Andrew Kirwan for Noel Mackey (25 mins) and Christopher Mackey for Shane Power (51).
Modeligo: Cian O’Byrne; Sean Hennessy, Brian McCarthy, Robbie Buckley; Thomas Walsh, Pat Fitzgerald, Shane Troy; John McGrath, Kieran McCarthy; Rian Reddy, Sean O’Donovan, Patrick O’Donovan; Jamie Troy, Patrick Walsh, Nicky O’Donovan.
Scorers: Jamie Troy (0-6; 0-5f), Patrick O’Donovan (0-4; 0-3sl), Patrick Walsh (0-1) and Thomas Walsh (0-1f).
Substitutes: Michael Troy for Nicky O’Donovan (48 mins) and Padraig McCarthy for Sean Hennessy (60).
Referee: Tommy O’Sullivan.