Pride Despite the Fall

Eighty minutes after Sunday’s final whistle, Michael ‘Brick’ Walsh was still in his match fatigues, stood on the sideline, signing hurleys, shaking hands and posing for photographs. His record breaking 74th Championship appearance may have ended in defeat, but whatever disappointment the Stradbally clubman was feeling was completely and utterly concealed. The consummate professional in an amateur game, giving time to both his own people and the Cork support, served to underline his greatness in the wake of Waterford’s third Munster Championship defeat.
The ovation Walsh received following both his substitution and his eventual return to the Deise dressing room could not have been more deserved, and that’s what made last Sunday, irrespective of the defeat, a special day for one of hurling’s all-time greats. 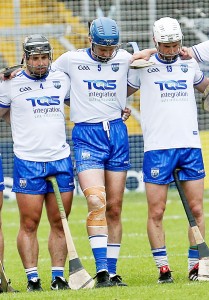 “When you think about Waterford (sport), you think of John Treacy, you think of Sean Kelly, you think of John O’Shea – great Waterford people,” said a clearly downcast Derek McGrath following Sunday’s reversal. “And I think when you think of Waterford hurling, you think of the great Ken McGrath, you think of Tony Browne (whom ‘Brick’ replaced when making his Championship debut against Kerry in 2003), you think of Philly Grimes and that era, etc, but for me he stands right up there with all of them for his pure humility, his warrior-like qualities and his guile and cunning, for which I think he doesn’t get enough respect. And he’s just a fantastic person to share a dressing room with, he’s special and he could go again (next year), that’s the reality, that’s the way he is: he’s not finished yet.”
That Waterford are out of the Championship, a cold reality already seven days a stewing before Sunday’s run-out in Thurles, remains incredibly difficult to digest.
That 2018 yielded just a single victory between League and Championship in the aftermath of last summer’s heroics will be dissected and discussed well beyond this year’s lengthiest day.
Thankfully, the more than occasionally vicious mask that social media tends to wear was not in sight over the weekend, with the consensus opinion reflecting on an unprecedented injury list which put pay to Waterford’s Championship ambition. And while Tipperary’s phantom goal at the Gaelic Grounds will stick in the craw for quite some time to come, it was but one of a myriad of factors that ultimately put pay to the Deise’s summer dream. For all the drama produced during this compelling mini-league, the two teams which failed to win a match between them ultimately vacated the series.
That both Waterford and Tipperary played over four successive weekends and didn’t advance cannot be discounted, and this will have to be considered when next year’s Championship is scheduled. More games are here to stay, I think most of us can readily assume, but equally, they ought not to be quite so compressed.
And so thoughts now turn to our Under-21 team, the last inter-county hurlers standing in 2018, which will take on a Cork side tomorrow (Wednesday) evening packed with senior panellists and high on All-Ireland ambitions. 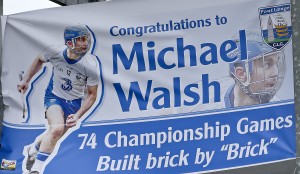 The last pure, “off the cuff” GAA Championship, as manager Sean Power describes it, represents Waterford’s final hurling roll of the dice for this particular summer. It’s also a reminder of sport’s finest and most necessary sentiment: the hope the next game always and forever will provide.
Following most teams represents an exercise in managing disappointment. After all, only one flag can ever be planted on the summit of Everest each and every season.
And those Deise fans who made the trip to Thurles on Sunday, and stuck around to salute Michael Walsh, will buy their season tickets again come the winter. They’ll keep on dreaming. And our players must do likewise. Deise Abú. Deise go deo.