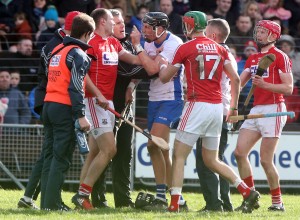 Tension between Waterford and Cork is likely to go up a few notches from last March's National League meeting at Walsh Park. | Photos: Maurice Hennebry

Dermot Keyes (DK): How well do you feel the training camp at Fota went, Dan?
Dan Shanahan (DS): “Pretty good, Dermot. It’s important that we do camps like this in terms of bonding and getting the lads together. It’s something we did in previous years and I have to say it went really well for us.”
DK: That level of preparation is a far cry from what previous generations would have been accustomed to prior to the Championship, and I suspect it’s changed a great deal even since your own early playing days?
DS: “Well when I came in first, you just didn’t have get-togethers like that, and as the years went on, they did come in; we went to Portugal with Justin (McCarthy) and they were very beneficial – it was great to get some warm weather training in. But the facilities we have at home now, in Fota, and at the Gold Coast for that matter – are unbelievable. We’ve been to Fota this year and last year, getting in good nutrition, getting treated properly for injuries and the pitch at Fota is the best I’ve ever hurled on. There’s a reason why the Irish soccer team goes training there; the houses the lads for the week were massive and the whole experience was unbelievable.”
DK: Getting in double sessions at Fota, something I suspect you couldn’t do during a regular training week, must be incredibly beneficial in contrast to, say your average winter session, I’d imagine?
DS: “It is, to be honest with you. We did three sessions on some days, but you couldn’t do that every day, of course. But it depends on how lads are recovering and we can’t lose sight of the fact that we’re dealing with amateur players regardless of how well they’re training and looking after themselves. They’re getting great treatment off our physios, and the likes of Stephen Barrett and Gary Walsh are great men and they know what they’re doing. But the players want these camps because they’re determined to get the most out of themselves; every county wants these kind of get-togethers and thanks to Club Deise we’re able to have these camps.”
DK: I can recall Derek, after the League match with Cork, talking about how good their forwards are, and I suspect it was no surprise to either you or him to see the way they went about their business against Tipperary?
DS: “They’ve six forwards who could get on any county team – and that’s not me blowing them up or anything. They’re great forwards – they proved it the last day and they proved it when they came to Walsh Park and beat us. We know what they’re capable of and it’s going to be interesting. We’re really looking forward to it.”
DK: Does the fact that Cork have had that impressive run-out already give them some level of advantage, all the more so since it will have been 11 weeks between competitive matches for Waterford by the time the ball is thrown in on Sunday?
DS: “It would, to be honest with you. They’ve the Tipp game under their belt and they’ve a round of Senior Championship played in Cork as well in the meantime. But having said that, we have done a lot of game-based stuff in training and believe you me, it’s been tough. Well it has to be. It’s been really intense. We have 30 lads looking for 15 places and they have given it absolutely everything. As a management team, we couldn’t have asked for any more from them.”
DK: There was a lot of talk over the winter about Tipperary being that few yards ahead of everyone else in terms of the Championship, which I never really bought into, and suddenly, largely on the basis of their League Final performance, Galway were installed as favourites for Liam MacCarthy. This prediction business is incredibly fickle…
DS: “Ah, it is, but I do my best not to take any notice of it. We can’t be worrying about what the bookies or the experts say. All we can do is worry about Waterford and hope that on Sunday, we’ll give Cork a game. And you need that bit of luck too; you saw that when Tipp didn’t take their goal chances against Cork, and the save Anthony Nash made from Seamus Callanan was a huge moment in that match. Cork soaked up the pressure and pulled away at the end.”
DK: While Cork ran up a huge tally against Tipperary, they also conceded 25 scores so there may well be things Waterford can exploit if things go to plan?
DS: “Well I’m sure Kieran Kingston is thinking the same thing and is probably saying he won’t want to concede as many on Sunday, and we certainly wouldn’t want to be conceding what Tipp did so it’s a tit for tat game, Dermot. We’ve the utmost respect for Cork and we’d be hoping they have for us. But at the end of the day, it’s Cork versus Waterford and Cork have never feared us, so it’s up to us to bring our game to them.”
DK: It’s hard to believe that seven years have passed since you struck the effective match winner in the Munster Final replay under the Semple lights. And while Liam MacCarthy has to be the ultimate target, I’d imagine you’d love to see the lads get over Cork and back into a position to win a provincial title?
DS: “The Munster title is still huge. It still matters and when you’re lining out behind the band with 40,000 to 50,000 watching on, it’s still unbelievable. Like every county, we always want to win the Munster Championship but we’re not getting carried away. We know what we have to against Cork. It’s going to be physically tough and there’ll probably be a bit of shadow boxing in the first 10 minutes of each half and we’ll see what happens after that.”