Eastern Junior ‘C’ Football Final
St Saviours 1-10
Portlaw 0-06
A strong second half showing ensured Saint Saviours ended 2018 with silverware when they saw off a profligate Portlaw side on a damp Dunhill sod on Saturday afternoon last to claim the Junior ‘C’ Eastern Football title.
The city club opened the scoring in the fifth minute through Calvin Curley, with Eoin Galvin drawing the sides level with a fine effort six minutes later. Man of the match John Paul Jacob opened his account with a mighty 30-metre kick in the 14th minute, before Galvin and Brian Coffey released Shane O’Brien, whose dipping shot flew just over the St Saviours crossbar. 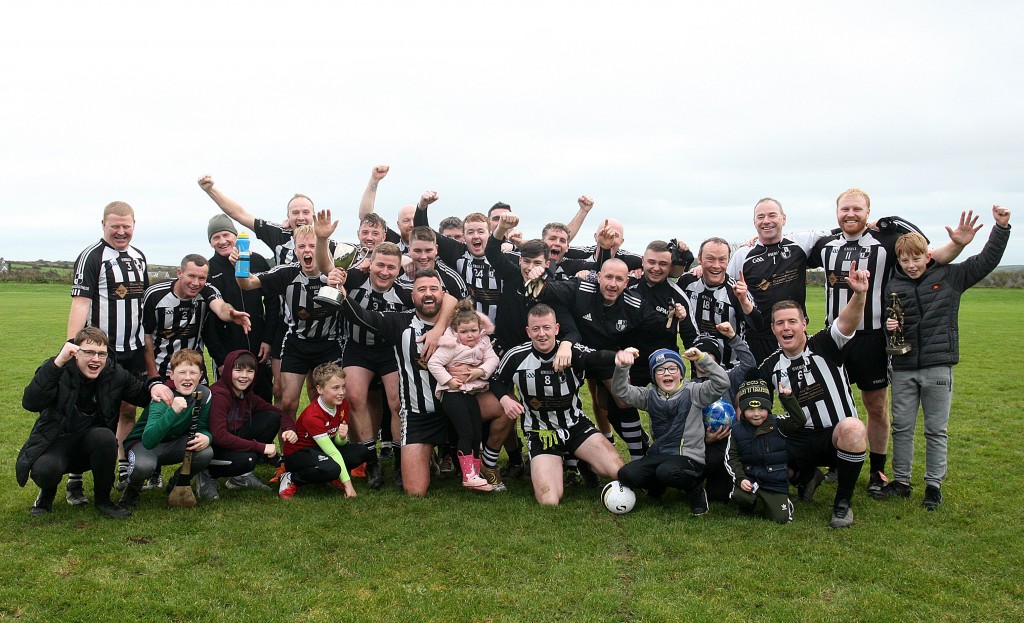 Fine work by the impressive Galvin released Gavin O’Connor for a 19th minute point, but by then Portlaw were guilty of some wayward shooting and poor decision making inside their opponents’ 21-metre line. John Paul Jacob, fed by Glen Taylor, found his range again after 22 minutes and he was next to score three minutes later with a free from distance. A minute later, Jacob added to his tally to complete the first half scoring (0-05 to 0-03) on a soft afternoon. While Saviours’ greater accuracy certainly meant they deserved their interval advantage, Portlaw left two if not three score behind them following a half in which the breeze and back pitch slope was in their favour.
Lively corner forward Shane O’Brien opened the second half scoring for Portlaw and the Tannery men drew level through an Eoin Galvin free after 35 minutes – but they were not to score only once more between then and full-time. From then until full-time, St Saviours made their greater accuracy count to match-winning effect, and their chances were enhanced following Logan O’Sullivan’s dismissal following two bookings.David Murphy handpassed the Ballybeg club back in front in the 39th minute after Darren Tuohy’s fine effort crashed back off the crossbar.
John Paul Jacob turned over another free in the 43rd minute moments after his blistering goal-bound effort cannoned off Alan Ronayne’s right hand upright. John Paul Collingwood landed a fine 50th minute point (0-08 to 0-05) before his fellow John Paul – Jacob – turned over another free three minutes from time.Shane O’Brien turned over an excellent point for Portlaw in the 59th minute to leave just a goal between the sides but from the next St Saviours attack, a speculative effort from Jim Connors dipped under Alan Ronayne’s crossbar to send the Black & White six points clear. Fittingly, the final score of the game was registered by the excellent John Paul Jacob in the closing minutes of a well fought tussle.