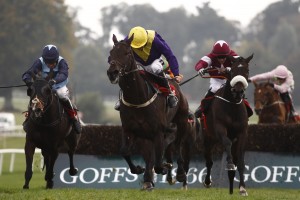 Kiltealy, Co Wexford handler Colin Bowe has his team in cracking order at present and he struck with Shantou Flyer in the closing Foley’s Bar & Off Licence Chase at Sligo on Wednesday of last week.
Sent off the 9/10 favourite to beat his three opponents, Shantou Flyer disputed the lead from the fifth fence until storming into the lead with two fences remaining. Runner-up Shadow Catcher wasn’t going to go down without a fight though and he came back to join issue once more at the final fence.
The 130-rated Shantou Flyer however wasn’t going to be denied and he asserted inside the final furlong ultimately obliging by a half-length.
Shantou Flyer’s jockey Mark Walsh was in excellent form on the day as he left the Cleveragh venue with three winners for he was earlier on the mark aboard Michael Winters’ Perfect Woman in the Irish Stallion Farms EBF Mares’ Beginners chase whilst he also joined forces with Niall Madden to collect the Frank O’Beirne Memorial Beginners Chase with Badgerfort.
The action moved onto Clonmel on Thursday and Kilmacow native Donagh Meyler enhanced his already burgeoning reputation by landing the Kilmore Maiden Hurdle aboard Cliffside Park.
The six-year-old Cliffside Park, trained by Meyler’s initial mentor in Eoin Doyle, always took the eye in running and the market leader led from two out en-route to putting three lengths between himself and runner-up Catcheragain. Cliffside Park, who came into this race with a 107 rating, is owned by Paul Mangan junior from Dublin.
A measure of 19-year-old Meyler’s current popularity can be gauged by the fact that this was his fourth winner in the space of the previous seven days. The likelihood is that Cliffside Park will now receive a break.
Ruby Walsh experienced a fine afternoon and he partnered two winners, both of them favourites. Walsh signed off by steering his father Ted’s Old Castletown to victory in the Eamon Kearns 50th Birthday Handicap Chase. The Fruits Of Love-sired Old Castletown made most of the running and he dug deep from the second last to thwart Knockraha Prince by one and a half lengths. Walsh was earlier on the mark aboard Eyes Of A Tiger in the Laganore Maiden Hurdle, the winning chesnut overcoming a serious final flight blunder to see-off Hatch Hall by a short head.
Eyes Of A Tiger’s Leighlinbridge-based handler Pat Fahy was similarly in double form for he landed the closing Irish Stallion Farms EBF Mares Flat Race with Ten Times Better. A daughter of the much-lamented Beneficial, Ten Times Better put her vast experience to good use by leading from the five-furlong marker with Ruby Walsh’s sister Katie to beat Glendine River by a comprehensive two and a half lengths.
The first session of the two-day Gowran Park weekend meeting took place on Friday and Willie Mullins sent out Daisy’s Gift to oblige in the featured Pat Walsh Memorial Mares Hurdle, a listed race over two and a half miles.
The eight-year-old Daisy’s Gift responded generously to Paul Townend’s urgings to lead at the final flight and she then tenaciously fought off her better-fancied stable companion Whiteout, to whom she was conceding five lbs, to score by a half-length.
Colleen Beag, a Tramore course specialist, ran her normal game race to return a further seven lengths adrift in third spot.
On Saturday, all eyes were focused on the Grade 2 PWC Champion Chase over two and a half miles at Gowran Park. Seven went to post and Henry de Bromhead’s Galway Plate winner Shanahan’s Turn was sent off the 7/4 favourite.
The market leader however was in trouble from three out and Cailin Annamh, the only mare in the line-up, gamely made her way to the fore in the shadow of the post to dismiss Alelchi Inois by a half-length in the hands of Barry Geraghty.
This was actually Cailin Annamh’s tenth career success and the daughter of Definite Article is trained by Jessica Harrington for the Flyers Syndicate from Co Monaghan.
The ‘Shark’ Hanlon-trained My Direction, owned by Paul Holden from Mullinavat, belied his 8/1 starting price by making every post a winning one with Brian Hayes in the closing Join Gowran Park Racing Club Beginners Chase.
My Direction was already well in command when runner-up Frrontline erred at the third last with three lengths ultimately separating the pair.
Hanlon indicated that My Direction could now be left off with next spring in mind and on this evidence, the British-bred five-year-old is well worth following in 2016.
Aidan O’Brien’s jumps team is increasing the whole time and he sent out Plinth to win the featured Grade 2 Istabraq Hurdle at Tipperary on Sunday. Plinth, in common with Istabraq owned by JP McManus, justified morning support from 8/1 into 6/1 by storming into the lead with Mark Walsh on the run-in to edge out Fethard Player by a length.