Waterford FC have re-signed Rory Feely, John Martin and Dean ahead of the 2019 season.The news follows last week’s announcement of the signing of Shane Duggan from Limerick and Cory Galvin remaining with the club for the 2019 season.Feely, the 2018 Young Player of the Year, joined the club at the beginning of the 2018 season from St Patrick Athletic and became an important player for Alan Reynolds’ side.The versatile former Tramore AFC player who played in defence, midfield and attack in his first season with the club made 30 appearances in 2018 and is thrilled to have committed for next season. “I’m absolutely delighted to re-sign for next season. I’ve been speaking to Rennie and I had to sort a few college things but I’m delighted to get it done and sorted.Last season was a really successful season for us and it was nothing more than we deserved I think. We had a fantastic dressing room last season and morale was brilliant to be around. The fans drove us on and it was a thoroughly enjoyable season overall. 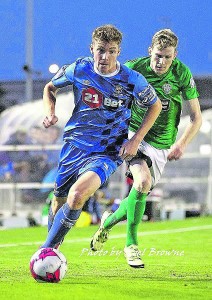 Tramore born Rory Feely has re-signed for Waterford FC ahead of the 2019 season.

“I’m really looking forward to getting going and meeting up with all the players again – it’s a top pro setup and with the facilities there, it was always my first choice to re-sign. Rennie was good to me last season with college and working around that, so it was an easy decision to stay.”Waterford FC also confirmed last week that John Martin and Dean Walsh have committed to the club for the new season. Injury meant that midfielder Martin missed a portion of last season, but he showed his promise with some fine performances and a goal in the final match of the season at home to Limerick.The Kilkenny-native played a big role as the club won the First Division in 2017 and made 13 league appearances last season for the Blues in the Premier Division.
Dean Walsh rejoins the Blues first team having made his way through the club’s U19 team before playing his part in the club’s promotion two seasons ago.
The 21-year-old, left-footed striker joined Wexford FC in July on loan for the second half of the season and will now join up with the first team again at the RSC ahead of the 2019 season.Speaking to WaterfordFC.ie after putting pen to paper for the 2019 season, John Martin said: “I’m delighted to have signed for another year with the club, I really enjoyed being part of the team last year with a really great bunch of lads.It was a tough year for me personally and with the injury to my foot it was frustrating. But I’m back now and focused on having a good off-season and getting myself in the best shape I can be in for when we get back for pre-season.
“It’s a very exciting time for the fans and everyone at the club with European football next year and I just can’t wait to get back and get going again.”
Dean Walsh is also delighted to have signed for next season. “I’m really happy to have signed back for next season.It was a good season last year and I enjoyed being part of a brilliant dressing room with some great characters in it. I’ll be looking to kick on this season now after getting some games on my loan to Wexford and I can’t wait to get started again.”Alan Reynolds is delighted to have secured the signatures of Feely, Martin and Walsh. “It’s great to get Rory (Feely) signed for next season. He played a big role last season and he’s an excellent, young player.
“He played in a number of different positions and really complimented the style we played. He brings a lot of energy to the side and we’re delighted he’s re-signed for the new season.”“I’m also very pleased to get both John (Martin) and Dean (Walsh) signed up for the new season. John had a tough season with injury but he worked really hard to get back before the end of the season and to finish with a goal is great for him.
Dean is another good young, local lad and he got some good game time at Wexford in the second half of the season. He’ll come back in with us now and push to make an impact this season. Both have made it through our underage teams and they’re exactly the kind of young, local players that are the future of the club.”