Jim Crawford, the Republic of Ireland manager, named his Republic of Ireland U18 home-based squad on Thursday last in Graun Park for the two international games against Wales which will be played at Graun Park on Monday, February 22nd (7.00pm) and at the RSC (12noon) on Wednesday, February 24th.
The Irish squad was picked from the FAI Inter-Provincial Tournament which took place in Waterford earlier this season and featured non league players but players who have since joined that league remain eligible. 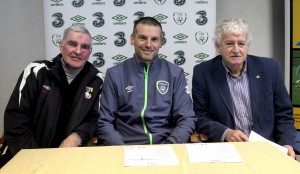 Republic of Ireland U18 Manager Jim Crawford in Gruan Park Tramore on Thursday last to announce his squad for the two International friendlies against Wales later this month pictured with John Power (Tramore AFC) and Milo Corcoran (FAI).

One of the players in the 22 man squad is the Tramore AFC goalkeeper Craig Dunphy. The Seagulls custodian is enjoying a wonderful season and recently performed superbly against Janesboro in the Munster Cup following his call up to the Tramore Premier team. Jim Crawford said Craig is a vital member of his squad. “Craig Dunphy is a goalkeeper I saw playing in the Inter- Provincial series and he only conceded one goal and was certainly a stand out performer and then last week in the trials he played in two games and kept two clean sheets.
“He commands his area well and has a great presence and a great understanding of what we will be trying to do in the games against Wales. Our goalkeepers play an important role in the way we want to play because we like to build from the back and he has got a great education football wise and he really has a wonderful grasp of the way we perform and I’m delighted to have him on board”.
The Irish boss continued. “Wales will prove to be tough opposition because their players play in the League of Wales but having said that this is a wonderful opportunity for our lads to wear the Irish shirt and stand tall when the National Anthem is played. Usually we have a limited amount of time with the players but we will play Bohemians and the Irish U17 team before we come to Tramore and Waterford and that will be a great help. Those teams will play the type of football Wales will play so we will be well prepared for what they will throw at us. The fact that we will be staying in The Majestic Hotel in Tramore from the previous Friday is fantastic and that will also help us greatly The facilities here in Graun Park are excellent and it’s always a pleasure to play on the surface here and needless to say the RSC is top class also so both ourselves and Wales will have no complaints on that score”.
John Power, the Tramore chairman said it was a huge honour for his club to stage the match against Wales and he thanked Milo Corcoran for bringing another international match to Graun Park, a statement that was echoed by the legendary Tramore icon Paul ‘Witchy’ Power. He also added that the style of football that the Irish team play will please the spectators that will be present in Graun Park on February 22nd and at the RSC two days later
Paul concluded by stating “The fact that Craig Dunphy will be playing will add greatly to the occasion and it’s a brilliant honour for Craig, his family and the Tramore AFC club”. Following the press conference, which was attended by the greatest goalkeeper ever to play in the League of Ireland, the sublime Peter Thomas (a former goalkeeper and manager with the Tramore club following his incredible playing days with Waterford FC) Craig Dunphy posted a message on his Facebook page. “Absolutely delighted to be called into the Ireland U18 squad. Hopefully the start of good things to come”.