Wednesday last was in many ways an historic day for football in Waterford. At 9.00am a vicious wind blew across the RSC as Storm Eleanor was determined to have the last word following a night of string winds and heavy rain.
However inside the newly decorated home dressing room a number of players were sitting together and chatting about what was ahead of them on the first day of pre-season training and indeed the new season itself.
First arrivals Paul Keegan, Dave Webster and Bastien Herywere were shooting the breeze (pardon the pun) and getting to know each other.
At 9.30am all of the signed players were ready to get stuck into a long day of working out in the gym and later on in the evening on the training ground.
This of course is a completely new regime for the players of Waterford FC as they are now employed on a full time basis and it’s a far cry from the recent past when players rushed to training in the evening after working for eight or nine hours in their “day” job. Wednesday, January 3rd, 2018 will be remembered as the day Waterford FC moved into a new professional era, a move that was unthinkable two years ago.
At one stage it looked as if the club would fold and the begging bowl was the order of the day but thankfully all of that is now in the past and we can embrace a brand new future with hope and confidence. 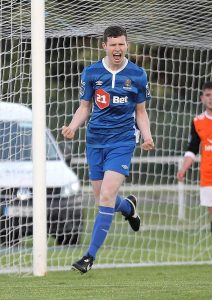 The excitement among the players was palpable last Wednesday and although many of them have been on the circuit for a number of seasons they were as excited as new guys just starting out on a road which hopefully will see the Blues hold their own in the Premier League.
I took the opportunity to speak to five of the main personalities prior to their first day of graft including Dean Walsh who’s thrilled to have the opportunity to play professional football.
“As one of the younger players this is a big challenge for me but to be part of a professional outfit is amazing. The club have brought in a lot of top quality players and the pre-season games will give me an opportunity to stake a place in the team. I was delighted to be one of the first players from last season to be signed for our return to the Premier League. I will have to take my chance when it arrives but I am fine with that because this is my local club.
“I played against Rory Feely a few times when he was with Tramore so I am looking forward to meeting up with him again. The buzz here already is amazing and I believe we will kick on from last season. I will learn a lot from the experienced players here and of course I know the lads from last year very well. I am really excited about the coming months.”
For more on this story see this week’s print edition of The Munster Express newspaper