Munster Junior Cup. First Round
Johnville 1 St Joseph’s 8
Let’s be honest from the outset! No one saw this coming. Johnville have been playing well in Division 1A all season, especially at home and they went into this match in St Martin’s Park on Saturday night as favourites. There was one problem however. No one showed the script to St Joseph’s and the famous club, who actually won this trophy under the captaincy of Pakie Keane back in 1935, went on to stun the hosts with a display of attacking football that was a joy to behold. The previous week the Saints scored 11 goals against St Paul’s in the FAI Junior Cup to take their total in one week to an impressive 19. St Joseph’s took the lead on eight minutes.Shane Wyse crossed to the in-running Stephen Roche and he cracked the ball to the net with his first touch from 10 yards.
Two minutes later Shane Wyse increased St Joseph’s lead when he drilled the ball into the far corner of the net. 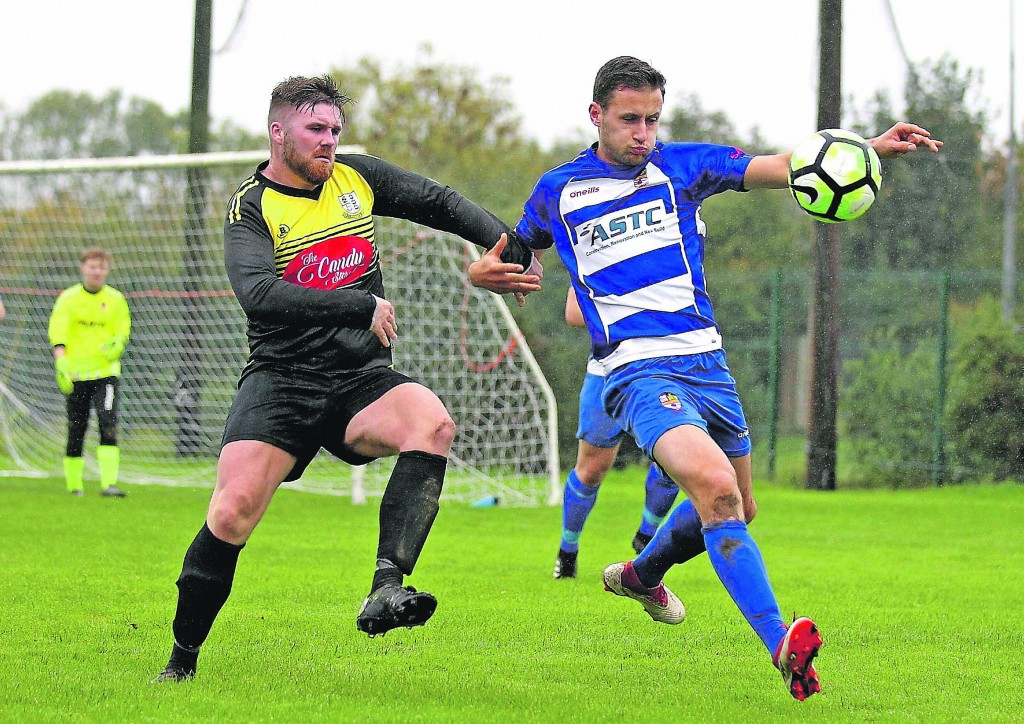 St. Joseph’s Lucas Malik is first to the ball ahead of Johnville’s Aaron Kennedy.

Two goals in two minutes rocked the hosts and things got worse for them on 23 minutes when Lukas Malik hammered a 25 yard free-kick past Jamie Chadwick.. The Saints scored their fourth goal on 41 minutes through Paul Smith, who found the roof of the net from all of 35 yards with a thunderous strike. Not content to go into the break leading by four goals St Joseph’s scored again on 44 minutes when Lukas Malik touched home a super cross from Geoff Tebay. The Johnville manager Paul Westwood did not make any changes during the interval as he wanted to give his charges an opportunity to redeem themselves.However three minutes into the second half Paul Smith scored his second goal of the contest when he was allowed too much space inside the 18 yards box and easily touched home a pass from Shane Wyse.
Paul Westwood made a triple substitution after 55 minutes but at that stage it was just a case of damage limitation.Paul Quilty netted a penalty for Johnville on 78 minutes after James Kennedy was adjudged to have handled the ball.Normal service was resumed on 85 minutes when substitute Robbie McAra chipped the ball over the head of Jamie Chadwick from 20 yards and Paul Smith completed his hat-trick in the last minute with a delightful volley from 20 yards. It really was a truly incredible display by St Joseph’s and a lot of soul searching will be the order of the day for Johnville this week.
Next up for the Saints is a game against Dungarvan Celtic in the FAI Junior Cup and that game will be played, believe it or not, in St Martin’s Park.