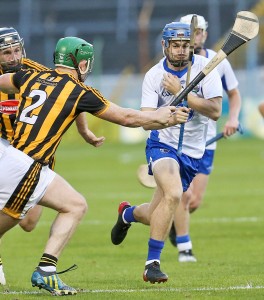 Let’s wallow. Just for a little while. I think Waterford hurling fans have earned it. Fifty eight years waiting, hoping, praying, to see a team from the south bank of the Suir get the better of the game ruling aristocrats on its north bank. Fifty eight years. Fifty eight long years.
And let there be no doubt, this is not a mere footnote in the Deise’s hurling story. As standalone victories go, it might yet prove the most significant since Justin McCarthy’s Deisemen led Tipperary a merry dance in the 2002 Munster Final.
Of course, this was a victory in ‘just’ a Second Round Qualifier with no silverware on the line. The head knows that. The players and management know that.
But this was Kilkenny, a county with whom we have rekindled a welcome and genuine rivalry in recent summers, matches which have been on a par with the classic clashes with Cork of a decade and more ago.
Yet true rivalries need matches to produce positive and negative results for both contestants, and after the draws of 2013, last year and on Saturday night in regulation time, that big black and amber itch still needed scratching.
And now that’s been accomplished. At long, long last, after a night in which Waterford effectively won the game twice, only for Kilkenny’s astounding belligerence to surface in the closing dozen minutes of normal time, which sent this tussle into extra-time, to the near disbelief of both sets of supporters. Kilkenny, at long last, have been beaten.
Yet to see a team that had been eight points to the good and coasting to victory regain their composure after Kilkenny’s closing flurry of 1-5, really was something to behold.
Such a recovery and such a re-set was astoundingly impressive considering that the 70 minutes had ended with a rejuvenated Kilkenny in the ascendant.
But out came Waterford, full of fire, full of purpose, full of running and no shortage of onfield nous, outgunning their neighbours in extra-time by 2-8 to 0-7. One 58-year-old millstone is off this talented panel’s collective neck. Another still remains.
Of course, the head knows that we’re not yet in mid-July. The head knows that Cork are Munster Hurling champions. The head knows that Tipperary’s full-forward line has the volcanicity to take out any team still in the hunt for All-Ireland honours.
The head knows that a Galway team full of physically mountainous yet silken stickmen look like the Tribesmen’s best shot at the big one in three decades. They look the real deal.
The head knows that Clare and Wexford will be completely fine with being considered the least likely champions elect of those still in the heel of an extraordinary hunt.
The head also knows that Waterford, who finally cut the Cill Chainnigh forelock in a raucous Semple Stadium, have registered 5-58 over the past two weekends. And, yes, that late tail-off in normal time has not gone unnoticed – there was more than a hint of Groundhog Day about it. Yet, critically, Port Láirge got the job done.
Tadhg de Búrca and Shane Fives in particular will take the defensive glory, so too the outstanding Darragh Fives, but the Deise’s offensive line is now reaping its rewards as the team’s first line of defence.
The remarkable Brick Walsh, the stunning artistry of Shane Bennett, the end to end ability of the jinking Jamie Barron, and the rangy resistance of a ravenous Maurice Shanahan, makes Waterford a dangerous prospect as the title race narrows to a half dozen.
Masters of their own destiny? You’d better believe it. So relish last Saturday, but think of what yet lies ahead of this group. What a night they gave us in Thurles. Oh, what a night – and bring on the Wexicans!