Fresh ground was broken on a humid Wednesday night in East Cork as Waterford’s minor camogie steam withstood the pressure applied by Cork in the closing stages to record a first ever Munster title win at this grade. Taking the best that Cork could throw at them, the side captained by Shauna Fitzgerald dug deep into their reserves of courage to ensure they claimed glory by 2-11 to 1-11, having led for 56 minutes out of the regulated 60. And despite the near five additional minutes added by referee Mick Flannery, the Deise defence, spearheaded by the outstanding Kate Lynch, stood tall until the final whistle finally blew. In addition to Abby Flynn’s brace of goals and some ice-cool free taking by Kaeisha Tobin, Waterford demonstrated tremendous composure in the face of Cork’s second half resistance. Watched on by the Waterford senior panel, who subsequently exited the Championship against Tipperary on Saturday last (see Sport 4 and 5), Shauna Fitzgerald lifted the cup in the fading light. History had been made. 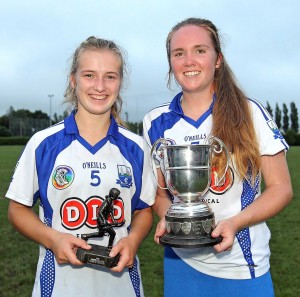 “It’s absolutely sensational,” an ecstatic skipper told WLR’s Tomás McCarthy following the presentation. “We knew coming up to Fermoy that we weren’t going to get anything easy off Cork, they’ve been up at the ‘A’ standard for years. This was the first time we were competing in the ‘A’ Final so to come out the better side of it is something else, to be honest but the girls deserve it.”
Reflecting on a nerve shredding conclusion, the Gailltír clubwoman said she and her team mates knew that Cork were going to come out “all guns blazing” as they chased down a five-point interval deficit. “The last 10 minutes was just a scramble for the ball in the back line and thankfully we came out with it,” she continued. “Our wing backs even came back into the full-back line and it was all hands on deck, really.” 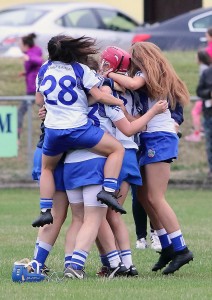 Deise boss Kevin Barry couldn’t have cut a happier jib as his panel jigged around the paddock in celebration, joined by a sizeable travelling support.
“There’s no egos in this group,” he beamed. “Everyone works hard and that really came into play in the last 15 minutes when we dug in and Cork came at us – we had our centre-forward playing full-back at one stage. And from last November we told them: hard work will win games, even if you’re not playing well. And they did what they were asked to do. There hasn’t been a word of complaint out of any of them the whole time we’ve been together. In snow, sleet and rain, from Modeligo down to Passage, they trained in all weather and they’ve got their reward for all that hard work today – and it’s all about the players, not us people on the line. They deserve all the plaudits. They’re a tremendous group and we’re very proud of them.” And so Kevin should be. So we all should be. Congratulations, Port Láirge!