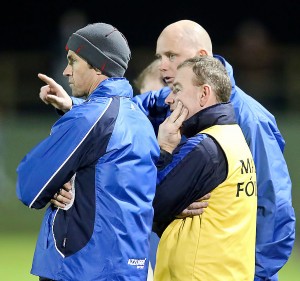 Deise manager Tom McGlinchey, while noting the level of wides Waterford struck in last Saturday’s McGrath Cup Final, was delighted to see his new charges get off to a trophy winning start.
“We’re very pleased with the win, 3-12 was good scoring too and it’s great to start the year with a victory like this.
“Every team starts off the year hoping to get as many matches as they can, but it’s like a lot of competitions; you enter it and the further you progress in it, the more you want to win it, especially in these secondary competitions…and it was the same with our lads; they wanted to win because if we’d put in a bad performance tonight after beating Cork, everything would have blown up on us so it was good to win.”
The management and panel’s focus, the “bread and butter” that Tom McGlinchey has extolled over recent weekends, has been all about the Division Four opener against Wicklow in Fraher Field next Saturday (throw-in: 7pm). And that, unsurprisingly, remains the mantra.
“This is fantastic preparation but as Thomas (O’Gorman) said himself in the stand there a few minutes ago, it’s all about next Saturday – the lads are very keen to get out of Division Four.”
Praising the manner in which his team didn’t panic in spite of UCC’s lively first half showing, Tom McGlinchey said that momentum was key to any team building up a head of steam.
“It’s the same for the Corks and Kilkenny of this world; players love games and hopefully now next Saturday, we can continue this on again.”
Deise centre-back Maurice O’Gorman, quietly pleased with his goal on the night, said it the win was “great for the players that I’ve played with down through the years. I know it’s only the McGrath Cup and it’s very early in the year but still it’s nice to get silverware.
“You look through the roll of honour before tonight in the McGrath Cup, Waterford only had one notch on the board, but we’ve doubled that now, which is great…
“It’s great to playing competitive football and to be winning at this time of the year, and it’s great to have four wins on the trot as well. We’ve been scoring well too and we’re fortunate to have Podge Hurney, Michael O’Halloran and Gavin Nugent have come on board, and when you add that quality, that can only help us when it comes to winning matches.”