Ballygunner end 17-year wait to conquer Munster
A golden hue washed over the North Tipperary skyline as the Ballygunner players made for the showers on a glorious Sunday afternoon, with the Munster Championship trophy at long last regained. Meanwhile, under a blue November sky. the Black & Red clad support was in no great rush home, and with good reason.
Some 17 years since their last provincial title, a moment such as this was worth pressing the pause button for before the drive home and the necessary thoughts of school lunches and another week’s work bore consideration. For this was a freezeframe in life’s helter-skelter in which the world came off its axis for a joyful couple of hours, when a Ballygunner side laden with talent and loaded with promise delivered upon its potential against mighty Na Piarsaigh, the heretofore unbeaten Munster champions.
To see corner-back Ian Kenny some one hundred-plus yards out of position, chasing a ball into the corner in the third minute of additional time, exemplified the attitude of this Ballygunner outfit. 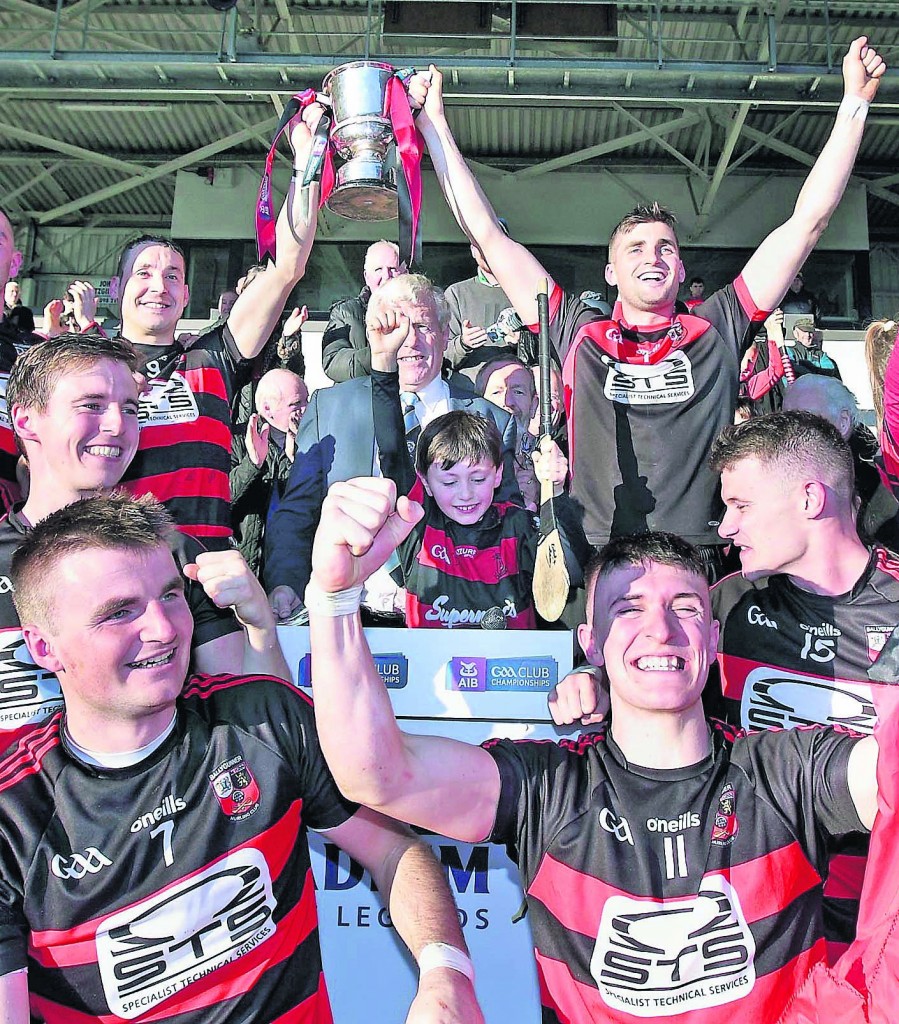 The joint captains of Ballygunner, Shane O’Sullivan and Stephen O’Keeffe raise the AIB Munster Club Championship trophy after it was presented to them by Munster Council Chairman, Diarmuid O’Sullivan, following their victory over Na Piarsaigh in Semple Stadium on Sunday last. | Photo: Noel Browne

To see Wayne Hutchinson dominating the closing 10 minutes of this full-blooded contest, twice plucking the ball away from Na Piarsaigh palms in what felt like a flash, was desk-thumping stuff, cognisant of his own personal journey these past few years. To see Peter Hogan, a throwback from a different hurling age, giving the Na Piarsaigh defence twisted blood in a coming of age performance, also hinted of what this prodigious young talent may yet produce in Waterford colours. The same applies to the versatile Billy O’Keeffe, who must have grown a few inches taller by full-time: he was simply immense from first whistle ‘til last. Pauric Mahony, who has also attained an even higher level in his all-round play this year, hurled like a leader all season long, so too Shane O’Sullivan, whose commitment to physical preparation is equalled by his off-field examination of the game.
Committed to the final ball, as intent on grafting as they were on flicking, passing and shooting, Fergal Hartley’s men dominated the vast majority of this tussle, restricting the defending champions to just 1-03 over the match’s ‘final’ 54 minutes following a slow rise from the blocks. In the wake of the comebacks against Midleton and Ballyea, this truly was a performance from another plane by Ballygunner, full of composure, quality and ruthlessness. The right stuff. The stuff of champions.
“Adrian Breen scored a goal and five against us last year,” said a proud Gunners selector Pádraig Connelly, his eyelids welled with emotion amidst the joyous on-field scenes following the full-time whistle. “He was taken off with 10 minutes left today. We kept him scoreless.” And to end this wait by beating such an outstanding team makes this overdue success all the sweeter, and there’s no escaping that.
“This wasn’t a one-year project,” said Ballygunner manager Fergal Hartley. “This has been, arguably, a seven or eight-year project. We were beaten last year, we knew we came up short and weren’t good enough, so we went back to the drawing board and I wouldn’t quite say we had to start again, but we realised we weren’t going to win a Munster Championship, I suppose, with the same performance from last year. We literally took it game by game but in the back of our minds, this is where wanted to be, we wanted to have another crack at Na Piarsaigh. They’d beaten us in two Munster Finals and this is what the lads wanted. They’re an incredible bunch, they really are.” Indeed they are. And this adventure is far from over yet. Ballygunner: Munster Champions. Now that’s worth savouring.