Home » Sports » Soccer » Waterford Crystal cruise into next round

Waterford Crystal cruise into next round

Matt Keane Reports
Waterford Crystal followed up their excellent league win against Hibernians when they outclassed Brideview at the RSC on Saturday in the Munster Junior Cup.
The team from West Waterford are currently third in their league behind the leaders Kilworth but they have two games in hand.
Waterford Crystal took the lead after ten minutes.
Jordan Henley, who played in goal when Waterford won the 2016 U21 All-Ireland Hurling title in 2016 was forced to take down Aidan Tracey just outside the penalty area and after he had dusted himself down, Tracey gave the visiting goalkeeper William Curley no chance whatsoever with a brilliant free kick. The ball nestled in the top of the net.
That goal rocked the westerners and they almost fell further behind on 26 minutes when Emmett O’Toole picked out Mitchel Casey from the right but William Curley did well to hold Casey’s hard downward header.
Aidan Tracey almost scored his second goal shortly afterwards when he cracked in a low strike from the left but the ball whistled past the far post. 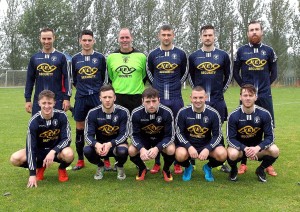 The Waterford Crystal team that were much too strong for Brideview in the second round of the Munster Junior Cup.

Crystal did however score their second goal after 36 minutes.
Nathan Phelan was allowed control the ball in the middle of the park and he slipped the ball to Shaun Corcoran who duly found the net from 20 yards with a sweetly struck shot with his right foot.
The pressure continued to mount on Brideview and they were lucky no to concede once again on 42 minutes when Adam Forsey played the ball down the right flank to Emmett O’Toole who cut into the 18 yards box but he was unable to keep his shot on target and the ball went narrowly over the crossbar.
On the blow of the interval a Nathan Phelan shot looked to be net bound but central defender Aidan Kearney somhow managed to deflect the ball away at the expense of a corner kick. The only time Brideview threatened was early in the second half when Darragh Buckley picked out Tom Daly who let fly at goal but Mitchel Casey managed to head the ball away. Normal service was resumed after that and it came as no surprise when the hosts went three in front on 68 minutes.
Shaun Corcoran was in the right place to notch his second goal of the contest after William Curley could only parry away a blistering shot from Johnny Gleeson. Goal No 4 arrived in the 83rd minute though Johnny Gleeson who found the net with a sublime right-footed shot from 20 yards after he had controlled a brilliant pass from Bradley McDonald.
Deep into stoppage time Aidan Tracey thought he had scored his second goal but his angled shot from the left came crashing back off the crossbar. Next up for Crystal is an away league game against Carrick United and the former champions will not be taking anything for granted against a rejuvenated Waterford Crystal squad.
WATERFORD CRYSTAL: Derek Hearne, Adam Forsey, Jason Phelan, Mitchel Casey, Colm Clancy, Shaun Corcoran, Aidan Tracey, Barry Ryan, Nathan Phelan, Emmett O’Toole, Johnny Gleeson.
SUBS: Michael Hearne for O’Toole (65) Bradley McDonald for Nathan Phelan (71) Dylan Ryan for Forsey (82)
BRIDEVIEW: William Curley, Kevin Henley, Kieran Fraser, Jordan Henley, Aidan Kearney, Shane Ryan, Jake Beecher, Eric Hickey, Darragh Buckley, Tom Daky, Jamie Murphy.
SUBS: Ben Ahern for Beecher (62) Tom McGrath for Murphy (67) Jason Flynn for Buckley (73)
REFEREE: Paul Butler.