EA Sports Cup. Second Round
Waterford FC 2 Galway United 1
Waterford manager Alan Reynolds made nine changes from the team which had defeated Finn Harps 4-0 four days previously in the league for this EA Sports Cup game which was played at the RSC on Monday week last, April 1st.This is a competition the club have not won since 1985 and Reynolds made it clear when the draw was made that he would like to see his charges enjoy a long run in it this season and following this victory, which was the third home win on the bounce, they are now into the quarter-finals.
The home side opened brightly and the Galway goalkeeper Andreas Werner (who was selected at the last minute due to the fact that first choice netminder John Tierney fell ill just before kick-off) did well to cut out a dangerous cross by Georgie Poynton after just two minutes.
Dean Walsh went close after eight minutes when he rose high to meet a Shane Griffin corner-kick but his header went narrowly over the crossbar. The pressure continued to mount on the Galway goal and Andreas Werner did well to save from Dean Walsh in the 13th minute.
It was only a matter of time before the breakthrough goal arrived and it came on 32 minutes. Shane Griffin took a free-kick 35 yards from goal and when the Galway defenders opened up like the Red Sea, Dean Walsh took full advantage and had no difficulty planting the ball into the net from inside the six yards box. 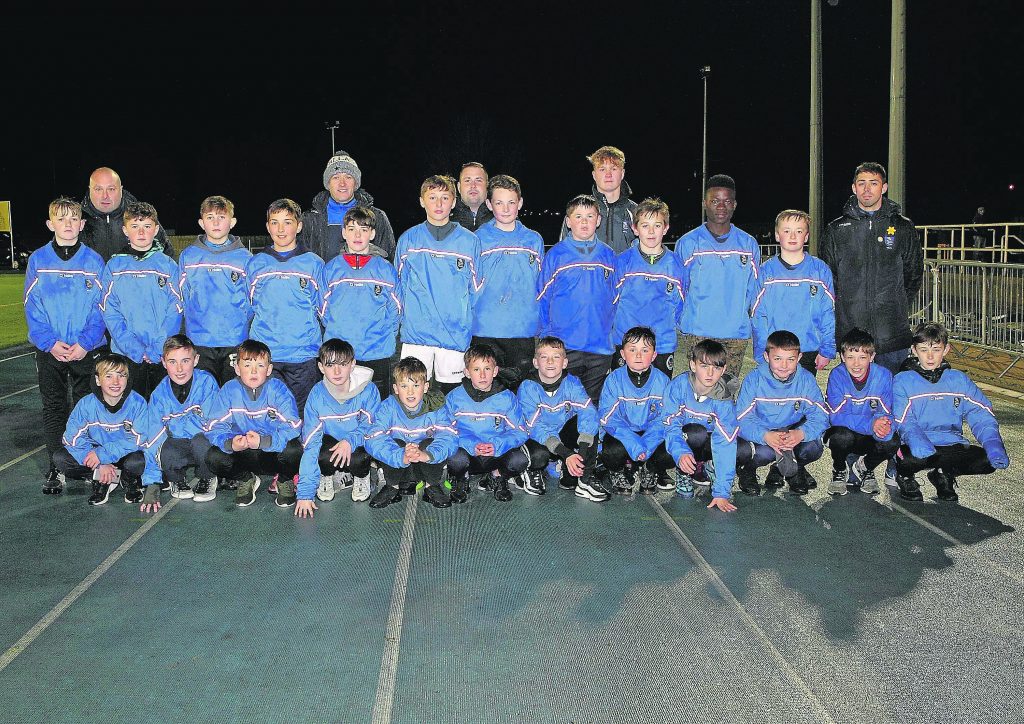 The Waterford Schoolboy Football League U-12 squad were the ball kids on the night.

The in-form local born striker was dreadfully unlucky not to score again just before the interval. John Martin squared the ball to him and he met the ball on the volley but it came crashing back off the back stanchion. The visitors looked a lot brighter in the second half and began to pin the hosts back on their heels and were rewarded with an equaliser on 57 minutes. Rory Feely attempted to play the ball back to Hugo Keto but it fell short and Jeff McGowan could not believe his luck and duly walked the ball into the net to score his first ever goal for Galway United.
That score was good enough to take the Waterford players out of their second half slumber and Bastien Hery took off on a great run just after the hour mark and laid the ball off to Cory Galvin but he missed the target by inches. The Blues regained the lead in the 66th minute and a peach of a score it proved to be.Regix Madika, who had replaced the injured Izzy Akinade after 30 minutes, played the ball forward to Cory Galvin and the diminutive Cork born midfielder found the net with a blistering strike from all of 30 yards. The home side took full control after that belter of a goal and Shane Duggan, Dean Walsh and Shane Griffin all had chances to score during the final minutes but some good defending and a fine save by Andreas Werner kept them at bay.