Thomas Barr’s delight at his win in Lucerne last week at the start of what was another brilliant week for Irish athletics.
Thomas Barr’s tweet “We’re back baby!” reflects not only delight but relief as the Waterford Olympian posted his best time in 13 months when he came home like the proverbial train to win the 400m hurdles, against a top-class international field, in Lucerne on Monday of last week.Barr produced an astonishing turn of foot down the closing stretch to snatch victory in 49.10Trailing in seventh at the final bend Barr looked strong over the last two hurdles as he powered through the field to pip American Teejay Holmes (49.20) with Jamaica’s Shawn Rowe third in 49.27.It was a timely run for the Waterford Olympian who has gotten off to a relatively slow start to the season. 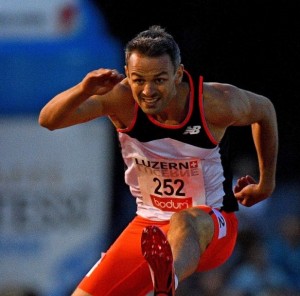 He didn’t break 50 seconds for his first three races of the season but clocked 49.53 at last month’s Diamond League meeting in Oslo.Last week’s time of 49.10 is the seventh fastest in Europe this season and moves Barr into contention of at least a place in the 400m hurdles final at the European Championships in Berlin next month. Barr’s best time remains the 47.97 he ran to finish fourth in the final at the Rio Olympics two years ago.Closer to home Joe Gough continued his trend of breaking records this season when he set a new mark for the 1,500 over 65.The West Waterford athlete clocked 4 minutes, 55.10 seconds for the distance at a meeting in Drogheda on Thursday night to shave 13.77 seconds off the old record, which was held by the late Willie Neelan of Cork. So far this year Gough has broken the outdoor 400m, 800m and 1,500 records.
The Irish success story continued at the World U20 Track and Field Championships in Tampere, Finland and although Orla O’Connor wasn’t in medal contention in the 10,000m walk final she put up a hugely commendable performance to finish 14th of the 34 competitors, in what was her first taste of competition at this level.The Waterford AC athlete, who was ranked 16th going into the event, also posted a new personal best time of 47 minutes, 55 seconds, a minute faster than her previous best and a new Irish U20 record. The race was won by Alegna Gonzales (Mexico) in just under 45 minutes.
To underline the strength of emerging athletes in Ireland at the moment, the women’s 4x100m relay team of Molly Scott, Gina Akpe-Moses, Ciara Neville and Patience Jumbo-Gula ran a national u20 record time of 43.90 to win the silver medal, the first ever relay medal by an Irish team at a major outdoor championship, while Sommer Lecky set a new Irish u20 record of 1.90m as she won the silver medal in the high jump. These medals along with the two gold medals and one silver won by Irish girls at the U18 European Championships the previous week is an amazing haul for Irish athletics and the future looks bright if these very talented athletes remain ambitious, focused and injury free.