Home » Business » Classifieds » Property » 'What to do about Waterford eyesores?' asks Cha O'Neill

'What to do about Waterford eyesores?' asks Cha O'Neill

Michelle Clancy reports
Independent Councillor Cha O’Neill has raised concerns about a number of urban and rural ‘eyesores’ in Waterford.
At last Monday’s meeting of the Metropolitan District, Cllr O’Neill (Ind) asked was there anything the Council could do to “move things along” so that new businesses proposed in the city centre could open faster at former pubs T&H Doolan’s and the Old Stand, as well as the former Brasserie and adjacent hairdressers in Arundel Square. 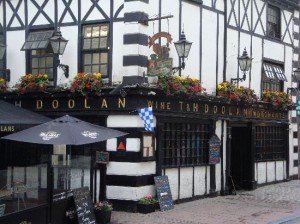 These properties, Cllr O’Neill said, were falling into disrepair and “looked awful” to shoppers. Cllr O’Neill also sought an update on the opening of a Wetherspoon’s Pub in the former Permanent TSB building on Arundel Square.
“The residents and businesses in Arundel Square are up in arms, with all the eyesores. For years we had an eyesore with Besco’s, but the recent paintjob it has made a big difference and we need to take action in the city centre now,” he said.
Paul Kelly (Administrative Officer, Planning), told the meeting that further information had been requested on the Wetherspoon’s planning application. The developer has until August to reply to this.
An application to extend the duration of planning permission on a proposed redevelopment at City Square had been finalised by the Council last December. That gave the developer another five years to develop the site so “the ball is now in the developer’s court”, he noted.
Cllr O’Neill also highlighted an ongoing litter problem on the Portlaw (R680) road, from Fiddown Bridge to the sadly derelict Cosy Thatch.
“I drove that road on the way home from the (Waterford/Limerick) match in Thurles and I never saw so much litter. Since the Council cut back the ditches, you can really see all the rubbish that had been hidden away. The road is so destroyed, you’d need people with pickers out there at this stage but it has to be done, it’s one of the main thoroughfares into the city.”
Senior Roads Engineer Paul McCarthy said there was an ongoing programme for litter picking on regional and national roads, to try to get it picked up before the regrowth of hedges starts.
Cllr Lola O’Sullivan (FG) also asked the Council to address a large amount of rubbish that had accumulated at Somerville in Tramore. It appears to be tidal, she stated.