CONCERN is mounting over plans to construct a major concrete manufacturing facility near one of County Waterford’s prettiest villages. Roadstone has applied to Waterford City & County Council to construct the plant within an existing quarry in the townlands of Park and Woodhouse near Stradbally on the R675 Coast Road, more commonly known as the Clonea Road and Glen Bog Road. The development, with an average extraction rate of 70,000 cubic metres of concrete per annum, will consist of a concrete plant, a storage area and a truck wash area. 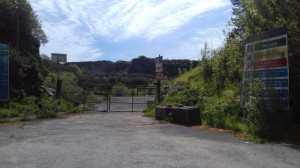 Roadstone wishes to construct a concrete manufacturing plant within an existing quarry in the townlands of Park and Woodhouse near Stradbally.

Local residents have expressed concern over the impact such a development will have in this area of the Copper Coast which is also situated near the Waterford Greenway.
The woodland and associated river to the west of the land holding is a registered natural heritage area. This river flows to join the larger River Tay, which flows south to the sea at Stradbally Cove, and is the water source that supplies the village.
Records held by the National Monuments Service of the Department of Culture, Heritage and an Gaeltacht indicate that there are a number of national monuments located either within or in the immediate vicinity of the Roadstone landholding. Additionally, the area is a regionally important aquifer (fissured bedrock) of extreme venerability (rock at or near the surface).
Roadstone have outlined that 60 per cent of stone that will be extracted from the existing quarry will be used in the concrete manufacturing plant. The company outlines that 150,000 tonnes would also be available for extract by road per annum.
It’s projected that the proposed concrete plant will operate for 14 hours per day.
While there is no application for quarrying or blasting stone, the extraction from the existing quarry is expected to generate a total of 134 movements per day. Residents fear that for fourteen hours per day there will be five trips to and five trips from the quarry which equates to a truck every six minutes on the R675.Per annum this is estimated to result in 19,171 additional HGVs on the R675.With the quantity of land now owned, residents believe serious intensification of quarrying activity is likely in this area.
Risk assessments completed as part of the application process highlight a number of areas of concern for residents. In relation to noise, the assessment indicates that a notable increase in ambient levels will occur. The assessment did not consider blasting, rock breaking or other quarry activities but only activities related to the manufacturing plant.It’s stated that the proposed development will have a neutral impact on employment, however construction and long-term employment present a minor positive impact at a local level.
Dust will be generated but will meet industry standards. However, residents fear the proposal will industrialise this area. Tourism has been a key focus of the Copper Coast over the last number of years as has the Greenway and there are concerns over the impact of such intensive industrialisation on this key area.
Less than three weeks ago, around 100 concerned residents attended a public meeting in the Barron Hall, Stradbally to discuss plans to construct a giant solar farm in the local area.
Speakers at that meeting also highlighted their concerns over the industrialisation of the local area and the adverse impact such a proposal would have on the many positive developments which have been made. The development planned for the nearby quarry was also a talking point among those in attendance as news of the proposal began to spread.
Submissions or observations in relation to the application are currently being accepted by Waterford City & County Council.