RENEWED calls have been made to refurbish a prominent city site. Waterford’s William Vincent Wallace (Millennium) Plaza is not being utilised to the extent it should be, according to local Councillors. Cllr Adam Wyse (FF) raised the need for improvement works during the May Metropolitan District meeting of Waterford City & County Council. He described the Plaza as an “iconic entrance” to the city. However, he said the area is not being properly utilised.
District Manager Fergus Galvin said the Council was looking at putting a plan in place.
However, he pointed out that there would be significant refurbishment costs involved particularly in relation to the decking and canopy at the site. Mr Galvin said the refurbishment work would be carried out on a “phased basis”. He added that the Plaza area had “never fulfilled its original purpose”. However, Cha O’Neill, in what transpired to be his last meeting as a Councillor, pointed out that the Plaza had been a “successful venue” which had in fact hosted a number of “fantastic” events. 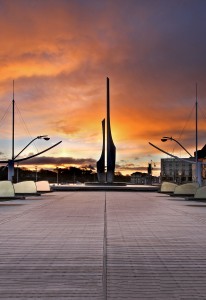 Cllr Adam Wyse described the Plaza as an “iconic entrance” to the city. | Photo: Noel Browne

He criticised the Council for allowing events to instead move to other locations.
At a previous meeting, he had said he was disappointed to discover that the Plaza was not viewed as the ‘in’ place to be.He described the area as a “forgotten part of the city” and added that it would be “disgraceful” if groups which receive assistance from the Council were refusing to use the Plaza for performances. “We have to do something with it as it’s gone beyond a joke,” he said.The Plaza was built as the city’s Millennium project in 2000 and was officially opened in 2001.
According to the Viking Triangle website, “it functions as both an amenity area where the goings and comings of the river can be savoured and performances can be enjoyed.”
The Plaza is dedicated to William Vincent Wallace (1812-1865), born in Colbeck Street, who was one of Waterford’s most colourful sons and was famous for his operas ‘Maritana’, ‘Lurline’ and ‘Amber Witch’. He is regarded as one of the greatest 19th Century composers.