“We had a co-ordinated response to the storm,” says Michael Walsh
Contextualising the significance of Storm Frank and casting an eye towards the challenges that will be posed by future weather events, City & County Council CEO Michael Walsh offered a stoical assessment at last week’s Emergency Meeting in Dungarvan. 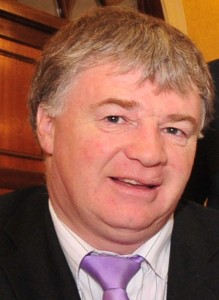 Recalling Hurricane Charlie in 1986, during he which he worked as an area engineer, Mr Walsh said events of 30 years ago were arguably worse than what Storm Frank had unleashed due to additional hazards at the time, including fallen trees.
Stressing the need for context “while not in any way lessening the hardship” being experienced by many residents in the county, Mr Walsh said there have been six severe weather events in the past 30 years, “three of four of which” were snow and ice-related.
Mr Walsh added that throughout December, and culminating in Storm Frank, Waterford, by his reckoning, was subjected to the largest level of rainfall “anywhere in the country”, with 81 millimetres of rain falling in one 24-hour period alone.
“Our response has to be proportionate and it’s probably worth mentioning in that context…that urban areas are now being designed in terms of storm wall capacity for 100 to 200-year periods…and the reality is that rural areas cannot be designed from a cost perspective on the same basis so the design in mind there is more in terms of drainage systems for 10 to 20-year periods, so it’s inevitable that you’re going to have more consequence there.”
Mr Walsh referred to the Council’s Severe Weather and Emergency Plans and refuted any suggestions about “a lack of co-ordination” when it came to tackling the obstacles created by Storm Frank.
“Much has been said about local knowledge, but when it comes to our emergency services and our own staff, we as the local authority are the first responder in the event of such an emergency.
“We are the people with the greatest local knowledge across the city and county in terms of fire service, Civil Defence and our direct crews and we know more than anyone else, perhaps with the exception of local Gardaí.”
Michael Walsh said the Council had liaised closely with the Gardaí throughout Waterford, as well as with neighbouring local authorities, as proved the case with Cork in the wake of the N25’s closure at Killeagh and Castlemartyr.
“When an event like this happens, we actually concentrate on doing something,” he told Councillors, “because that’s the way we’re organised”.
The CEO also referred to establishing a reliable information flow that had to be created in the midst of the storm “which isn’t always easy”, and that “no comparison” could be made during emergencies between loss of life and property damage.
“We’ve no difficulty with Councillors interrogating us on our plan, and we’ve already completed a review (on Monday last) in terms of where we were in relation to this event…and our communication, when compared to the last severe weather event, certainly improved in terms of communicating reliable information.”
Expressing his gratitude to the dedication and professionalism of Council staff in recent weeks, Michael Walsh said works to make roads (at the very least) passable “would be done as soon as possible”.
With respect to Waterford’s rural road network, the CEO told Councillors stated: “We need to restore the drainage that historically existed. We can’t take too long to do that; we need a four to five year period in which to do that…and we know that there has been a lack of investment over the past 20 years in that area.”
And on the urban front, “we will get on top of the John’s River, Cork Road and Inner Ring Road (flooding problems) and I am satisfied that we will solve those particular issues”.