Eoghan Dalton Reports
The chief executive of Waterford City and County Council (WCCC) has vowed to “go the whole hog” when pursuing businesses that haven’t been paying their commercial rates.Michael Walsh said the Council has been “too soft” on businesses in recent years and would now need to start collecting debts owed, including through legal action and by seizing goods. The comments came at this month’s plenary meeting, but reports in last weekend’s Sunday newspapers may strengthen the Council’s hand. 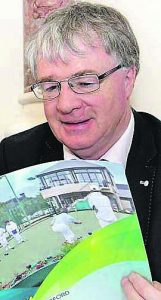 It was reported that the Ferrybank-based TD, Minister of State for Local Government John Paul Phelan, is set to introduce an Oireachtas bill that would give local authorities the power to impose daily penalties on businesses that aren’t paying commercial rates.“We have to collect,” Mr Walsh told Councillors in Dungarvan earlier this month. “Every year we put into the budget a significant amount for bad debt provision, but that has to be legitimate bad debt provision. And we put in an amount for income.
“If we don’t realise that income, that means we have a deficit at the end of the year, and the very simple reality from you as a Council is you’ll be cutting services the following year. So it’s a net sum game. A very significant amount of our income, the bones of €30 million, comes from commercial rates and reality is we’ve to collect it.” The Chief Executive’s remarks came in response to Cllr James Tobin (FF) who said he was pleading with the executive for “clemency and leniency for the small business people and the publicans”.
He said sympathy should be shown to the businesses, and contended: “It’s better to deal with them and get a bit, than to put them out of business and get nothing.”
Responding directly to the Tallow native, Mr Walsh gave a flat refusal: “The answer is no. There’d be very few businesses in the world that would not seek to collect their debts.”“I would advise, however, that publicans who are so advising in this area, their valuations are based on profit, are based on their accounts of the time, so in most instances they shouldn’t be unreasonable, is the way I’d put it,” he said. However, he noted, “We’ll deal with anybody reasonably at the same time. Once people are prepared to try to pay and try to engage with us, we’ll deal with reasonably. If they don’t we will be going the whole hog, including court, seizing goods, whatever it takes”.
An audit of the Council published this month showed that in 2017, 79 per cent worth of commercial rates were collected. It puts WCCC just ahead of the worst performing Councils on rates collection, with Sligo (77 per cent), Laois (75 per cent) and Donegal (74 per cent) coming bottom of the list. The audit also showed that arrears rose to €8.3 million while bad debts provision was €3.3 million. Figures for 2018 are not yet available.
The 2017 collection figure was down on the previous year’s yield of 81 per cent, although the auditor’s report includes comment from Michael Walsh noting that water networks operated by Irish Water were exempt for 2017. Otherwise, he said, the collection rate would be 82 per cent.
State compensation has replaced the rates previously received for water networks, though this exemption was lifted during 2017 and rates will be paid in future. Mr Walsh told Councillors that the local authority does not set the valuations of the properties and could not treat any two businesses differently, seeking to collect from one but not another. “The finance department does not have that level of flexibility,” he added.
He continued: “We have to operate on the basis of a policy. If it weren’t the case we could all do a deal with every fella we knew around the place and it just can’t happen that way.”Mr Walsh explained his strong words at the meeting, telling Councillors that he was concerned about sending an “ambiguous” message to rates payers. The only ambiguity he would allow, he said, is that if businesses are struggling, the Council’s finance department can help devise a payment plan.
“His office are there, they’ll talk to people, they’ll meet people. But it’s on the basis you have to pay,” he Mr Walsh. “We’ll certainly manage arrears, for example, in terms of them being paid over a substantial period of time…for people who are in trouble. We will deal reasonably in that context.”