Kennedy Bridge is “still on target”

The delivery of the Rose Fitzgerald Kennedy (N25) Bridge and Bypass is ‘still on target’, South Kilkenny Councillors were informed at the January meeting of the Piltown Municipal District, held in Ferrybank on Wednesday last. The circular on the project issued to Councillors detailed the continued progression of the bridge’s three main piers (3, 4 and 5), in addition to the installation of tower cables at piers 3 and 4 and the construction of cantilevered deck segments also progressing. 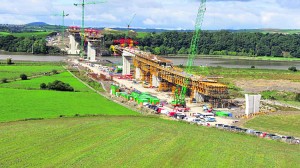 The construction phase of the Rose Fitzgerald Kennedy Bridge over the River Barrow is now over three quarters complete. A viewing area at Pink Point, as indicated on the accompanying graphic, can be visited to observe the ongoing delivery of the €250 million project.

“Road users will have noticed significant progress milestones before Christmas with the opening of new roundabout junctions on the N25 at Ballymacar, the N30 at Corcoran’s Cross and the L4026 Strokestown Road,” the circular states. “These roundabouts and associated works will continue in their current operation as part of the existing road network until the bypass opens to traffic later this year. Final pavement and junction works on the R733 are also anticipated to be completed by the end of January. On the County Kilkenny side, final surfacing works at the N25 Glenmore Roundabout will be completed in January and further traffic management will be in operation for these works. The new local road realignments for the Ballyverneen Road and the new Glenmore Link Road will also open in January.
The closure of the Pink Rock Road has been extended until February 18th and the road will fully re-open on or before this date. The construction of the bridge deck for the railway overbridge at Ballyverneen is also complete and finishing work is progressing.” Hopes for a summer opening of the new bridge and bypass remain high, with the Council re-iterating that the “scheme is currently scheduled to open in 2019”.