Kilkenny County Council expects to pay €17,000 for the removal of construction and demolition (C&D) waste material that ‘were not known’ to it or the contractor appointed to clear the site in April 2015.
Addressing the March meeting of the Piltown Municipal District, Planning Director of Services Sean McKeown said it was “very unfortunate and surprising that this C&D waste was uncovered…it came as a surprise to us all”. In a five point report prepared for last Wednesday’s meeting in response to concerns raised at the previous monthly meeting by Cllr Melissa O’Neill (Ind), Mr McKeown stressed that this unforeseen development was not expected to delay civil works on the site. 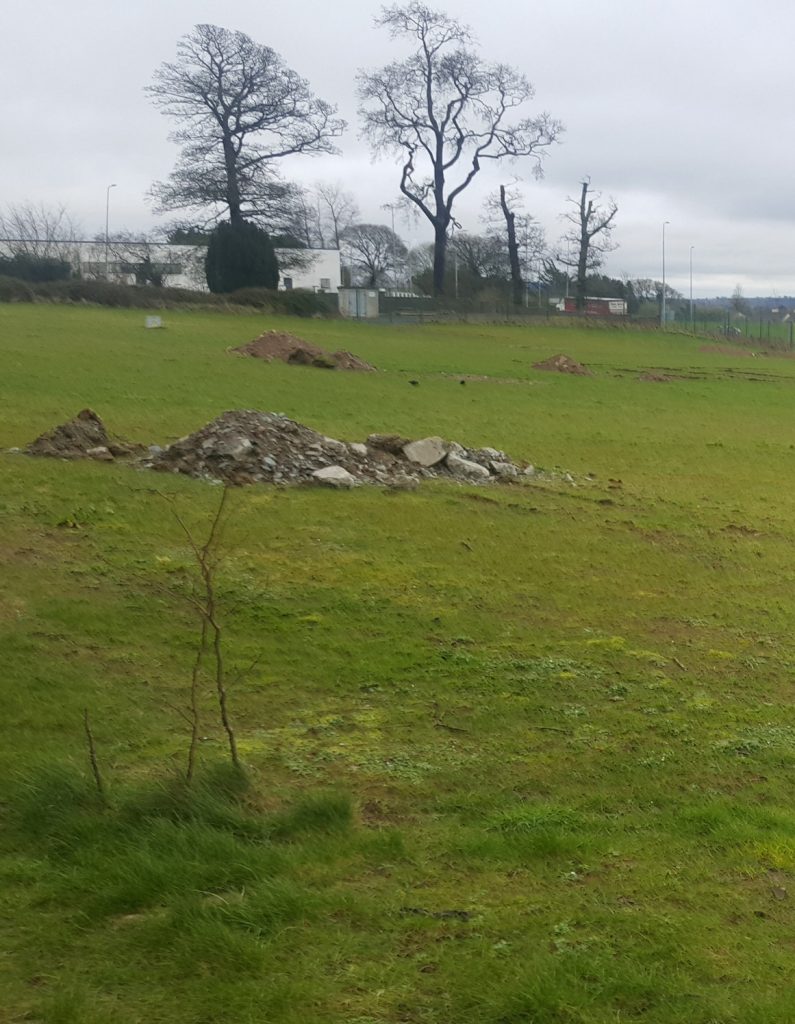 Civil works on the playground site are due to be completed by August, according to Kilkenny County Council.

A contractor (no longer in the business, the meeting was told) was appointed in April 2015 by Kilkenny County Council to remove “all construction material from the site”, according to Mr McKeown’s report.
“Due to the derelict nature of the site, the extent of buried structures and C&D material was unknown. All above ground waste, floor slabs, rising walls, and associated C&D debris was removed by the contractor. However, some of the very deep foundations, which have since been uncovered, were not known to Kilkenny County Council at the time and not spotted by the contractor. The C&D waste was therefore not removed.”
The 2015 contract awarded to the contractor (who was fully paid) came to €39,854. Mr McKeown writes: “This is considered to represent good value for money for the works undertaken by the contractor. It is not deemed that the contract value could have provided for the demolition and removal of the very deep foundations and C&D waste that has subsequently been uncovered.”
In response to why the contractor had not carried out all of the works on the site, Sean McKeown replied: “As indicated previously, Kilkenny County Council were not aware of the very deep foundations on site at the time. The contractor has since gone out of business. Kilkenny County Council have sought legal advice on the matter and there is no recourse available in respect of the additional costs that will now be incurred to remove the C&D material that has subsequently been uncovered.” Regarding additional costs which have been incurred by the Council to “fully remediate” the park site, Mr McKeown wrote: “To date, circa €7,000 has been incurred uncovering the buried C&D material. All areas were stripped and to examine how they would impact on the park layout. A further €10,000 will be incurred to remove obstructions to construct the park. The additional costs to Kilkenny County Council to remove the additional C&D waste uncovered will therefore be a total of circa €17,000.”
Regarding the timescale for the park’s completion, Mr McKeown claimed it “has not altered to any significant extent as a result of these findings. Tendering for the specialist work to construct the park have proceeded as planned. The tender request for the main contractor for the park has also been published with quotations expected back by (the) end of March. It is envisaged that the successful bidders will be on site in the summer months (possibly by July). and civil works are expected to be completed by (the) end of August 2019 with the planting to follow after the planting season (as of November).”
While Cllrs Ger Frisby and Eamon Aylward (FF), Pat Dunphy and Fidelis Doherty (FG) and Tomás Breathnach (Lab) accepted the findings of Mr McKeown’s report, Cllr O’Neill struck a different note.
“The idea that the Council didn’t know that there were deep foundations on a site dating from a previous planning permission that the Council granted in the first place just doesn’t wipe as far as I’m concerned,” she stated. “That’s beyond me…it’s scandalous in my mind…This is a mess and it’s the fault of the Council.” Cllr O’Neill added: “And I want to make it clear that I am not accepting this report.”
Towards the end of the discussion, Sean McKeown stated: “A number of assertions have been made here which I am not going to comment on.”
Drawing the debate to a close, Municipal District Chairperson Ger Frisby said: “Whether we like it or not, the foundations are not going to come out of the ground of their own…and what I feel we all need to do now is look forward to getting this park up and running.”