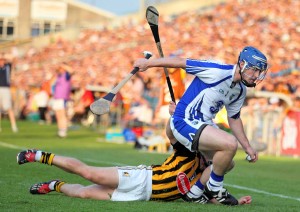 A decade ago, a majority of South Kilkenny residents surveyed in the area identified by the potential boundary change then proposed by Waterford City Council favoured such a realignment.
That unexpected conclusion was recalled by John Gilsenan of Inistioge-based Market Dynamics, just days before Waterford and Kilkenny clash ash in the All-Ireland Senior Hurling Semi-Final at Croke Park.
“We decided to conduct our own investigation expecting to find similar levels of outrage coming from the actual people who were, potentially, about to become residents of County Waterford,” said Mr Gilsenan.
The 2005 proposal by Waterford City Council accounted for 20 townlands north of the Suir – 5,000 acres and 5,000 residents – and led to accusations of “land grabbing” by some Kilkenny County Councillors in relation to the Waterford proposal.
This refrain has been repeated in recent weeks by some Kilkenny Councillors since the appointment of a Boundary Commission which will re-examine the issue and report back to cabinet by November.
“We did 150 face-to-face interviews with residents in the area that was supposedly under threat and to our surprise found that more people were in favour of the move than opposed it,” said Mr Gilsenan.
“This was because the majority of people living in the area were not from Kilkenny and therefore didn’t have an emotional attachment to the county.
“For this reason we found that 49 per cent of the people we interviewed supported the move, 33 per cent opposed it while a further 18 per cent had no opinion either way.”
Given that the surveyed area was largely urban and indistinguishable from the rest of Waterford city (i.e. Ferrybank) it is perhaps no surprise that two-thirds of residents weren’t from Kilkenny, said Mr Gilsenan.
“When asked ‘what county do you come from’, a total of 45 per cent claimed to be from Waterford while 22 per cent were from other counties,” he said.
“Those who were in favour of the plan were asked why they did so and about half (49 per cent) gave as one of their reasons the area’s proximity to Waterford.
“A significant proportion (28 per cent) said they thought that services would be better under the new regime while the same proportion felt the area had been neglected in recent years.”
But what of the Kilkenny-born and bred respondents? “Though many strongly opposed the plan, this view was by no means unanimous, with a significant number in favour of the proposed change. However, it is also clear from the research that many who opposed the plan did so with great vigour.”
Why so? “Their key objection to the plan was that they wanted to stay part of the county of their birth.”
John Gilsenan added: “In a final question we asked all respondents whether, if Waterford City & County Council’s plan went ahead, they thought services to residents would improve, 51 per cent thought they would.
“Overall, looking at the findings it is clear that the Waterford plan had considerable support from householders within the area in question.”
The 2005 interviews were conducted with a random sample of householders living in the area covered in the Waterford Boundary Extension Plan and it’s worth noting that the study wasn’t sponsored by any organisation.
Speaking to The Munster Express last week, John Gilsenan said Market Dynamics was considering “a similar and possibly a more comprehensive survey” on the boundary issue given the topic’s return to public prominence over the past two months.
“The fact that most of those we surveyed 10 years ago, and it’s worth repeating that these were residents in the area, were in favour of the proposal maybe got lost somewhat given the political utterances made at the time. And now that the discussion has re-opened since the Boundary Commission was appointed, we’re giving serious thought to conducting another survey on the issue.”