Donut Cabin off to sweetest start!

A new Waterford-based doughnut producer and delivery service has enjoyed a sweet first month in business, selling 1200 units at a city centre pop-up shop on Saint Patrick’s Day alone.The Donut Cabin, the brainchild of siblings Quentin McGuigan and Jenny Lanigan, took a year to get off the ground, and that good work has clearly paid off given the business’s initial levels of custom. “We started a group chat about it on January 31st last year,” Quentin (22) told The Munster Express. 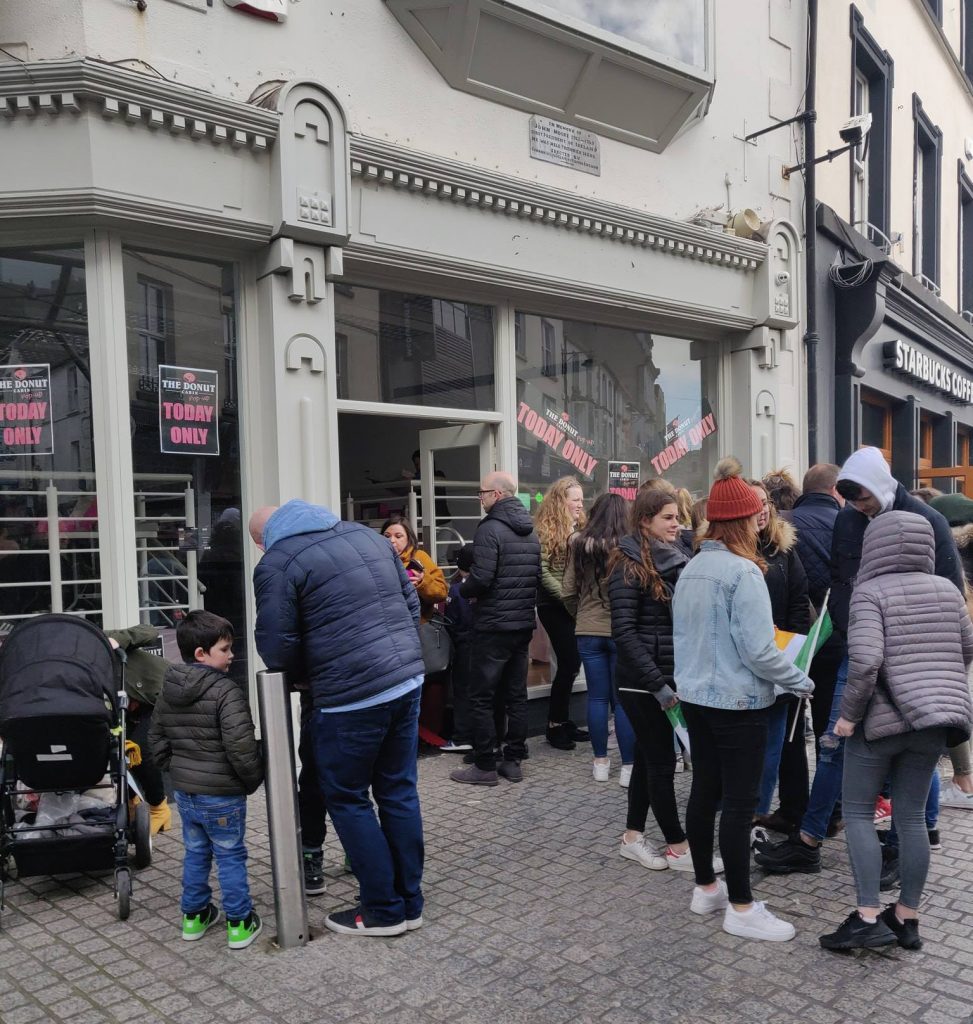 “Having looked at similar businesses in Dublin and Cork, we identified a niche in the market here in Waterford and decided to give it a shot. We gave serious consideration to opening a shop but when we started enquiring about rents, we realised we had to take a different approach to begin with, so while we’d love to have a shop somewhere in town at some stage, we’re just not at that point yet. So as of February 21st, which was our first official day in business, we began our delivery service from home, baking the doughnuts in our HSE approved kitchen and we on our first day, we sold out – and it’s just been manic ever since!”
With distinctive pink boxes, The Donut Cabin sells in four different quantities – three (€8), six (€15), twelve (€28) and twenty-four (€52).
With five different filled options, along with five distinctively flavoured ring doughnuts, Quentin and Jenny’s range has something for everyone, from the ‘Gold Digger’ (filled with toffee, dipped in chocolate with crunchie on top, drizzled with more toffee!) to ‘Orange Justice’ (dipped in chocolate with Terry’s Chocolate Orange on top, and drizzled with white chocolate).
And if the proof of the pudding (well, doughnut in this instance) is in the eating, then The Donut Cabin are clearly onto a winner – selling 1200 doughnuts in just five hours at the city centre offered further proof of that.
“That went really well for us alright,” said Quentin. “We had our pop-up shop at the former Carraig Donn shop and the doughnuts just flew out the door; we had tonnes of footfall and we were bowled over by how well it went – we’ll certainly be doing more pop-ups at food festivals, at various sporting fixtures and other events down the line both in Waterford and elsewhere.”
He added: “We’re open from 12pm to 8pm daily and we’ve been run off our feet since day one,” said Quentin. “We’ve been making and selling just under 400 doughnuts a day and 600 at weekends. It’s been absolutely fantastic and we’re just thrilled with the local support we’ve received. We’ve had customers from Tipperary, Cork and Wicklow too so word has spread around pretty quickly; we hit the various social media channels for about three weeks prior to our first deliveries and that certainly helped us a lot too in terms of building some recognition. A lot of people have been commenting on the pink delivery boxes too and that’s all helping when it comes to building the brand over the next few months and beyond. It’s been a great start and we’re thrilled with the reaction we’ve gotten around Waterford. It’s all been very encouraging.”
Quentin, a St John’s Park native who now resides in St Catherine’s Grange, is solely focused on developing the business for the time being. “I always wanted to run my own business. It’s an itch I’ve wanted to scratch since I was 17 – it just feels like the right thing for me to do – college is always an option I can return to in due course but this is where I’m at right now. Jenny and I want to give this our best possible shot and if the first three weeks are anything to go by, we might just be onto something.”