€12.6 million has been announced for key elements of the North Quays project.
The funding will go towards the sustainable transport bridge and access words at the Dock Road and Abbey Road in Ferrybank. The bridge will link the Clock Tower to the North Quays Strategic Development Zone (SDZ) site for pedestrians and cyclist, and will also accommodate a shuttle bus.There is an additional €1.5 million for the Bilberry to city centre Greenway extension and a further €1 million for sustainable transport initiatives for the city centre.
The funding has been approved by the National Transport Authority for Waterford City and County Council (WCCC). 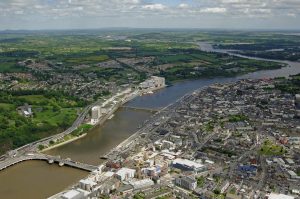 In a statement, WCCC said that the tender process has already commenced for the Sustainable Transport Bridge and Access Infrastructure works.
“The funding provided for 2020 will enable the project to progress to the construction stage and it is envisaged that a contractor will be on site before the end of the year,” it added.
Rob Cass, director of the project’s developer Falcon Real Estate, tweeted that it was “great to see funding starting to come through” for the North Quays.

He added that he is “confident remaining funding is imminent”.Council chief executive Michael Walsh recently told politicians that remaining infrastructural funding must be delivered by the end of March.This would go towards key aspects including the relocation of the train station and the sustainable transport bridge.The Mayor of Waterford Cllr John Pratt (Lab) welcomed last weel’s funding announcement stating, “The funding represents a confidence in Waterford’s ability to realise our ambitious programme of developments which when realised will transform our City into a major urban centre of consequence and a driver for regional development”.

Also welcoming the announcement was Cllr John Cummins (FG) who said that the new Government should “finalise the arrangements” for the development as quickly as possible.
“However, in the interim this funding will enable the project to progress to construction stage and it is envisaged that a contractor will be on site before the end of the year,” he said.

Relief was the feeling for Cllr Eamon Quinlan (FF) who said: “[I’m] pleased and not a little bit relieved to be honest at today’s announcement.
“These are the type of commitments backed up with, let’s be honest, the cash that Waterford has so desperately needed to advance our city as the capital of the region. An important milestone that will add confidence to the North Quays project and Waterford’s ability to drive the change for its own future.

The Council said that the funding overall represents support for a “modal shift” towards walking, cycling and public transport and “will act as a catalyst” for the sustainable development of the city, increasing connectivity both north and south of the River Suir.
The latest funding comes following previous transportation projects in the city, including works at Hennessey’s Road and Browns Lane, which is due to reopen shortly.