Last week, the European Parliament voted against a Greens/EFA group motion to reject a list of energy infrastructure projects eligible for EU funding. The list, known as the 4th PCI (projects of common interest) list, includes the Shannon LNG project and 54 other fossil fuel projects. 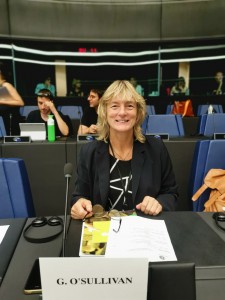 MEPs Grace O’Sullivan and Ciarán Cuffe, alongside their European colleagues in the Greens/EFA group, opposed the funding of new fossil fuel projects, and put forward a motion calling for the list to be rejected.

A recent study has revealed that the proposed fossil fuel projects are not necessary from a security of supply perspective and risk wasting billions of public money in outdated fossil fuel infrastructure.Grace O’Sullivan MEP, Greens/EFA Member of the European Parliament Committee on the Environment, Public Health and Food Safety (ENVI) comments:

“We are in a climate emergency and on borrowed time. It doesn’t make sense to spend more public money on fossil fuel investments, when there are viable, sustainable alternatives. Now is the time for Europe to step up to the mark on every level and follow through on the Green Deal commitments to invest in energy efficiency and renewables.

“I’ve long been opposed to the Shannon LNG project on these grounds, but also because we can’t continue with a hypocritical stance where, as a country, we ban onshore fracking, while at the same time we are importing filthy fracked gas.

“The EU must cancel these projects and start funding energy projects that are in step with the global climate crisis.”