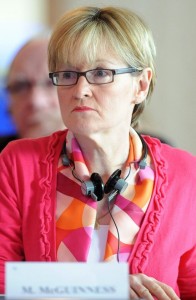 The boost in student numbers at Ireland’s Agricultural Colleges, including Kildalton in South Kilkenny, ought to be reflected in greater teaching and lecturing numbers, according to Irish MEP Mairead McGuiness.
Ms McGuinness, who is also Vice President of the European Parliament, told regional reporters in Brussels: “The question about the next generation of farmers has to be met with action. We now have a huge number of young men and women wanting to get trained so that they can avail of the incentives under CAP and become young farmers, but we don’t have enough spaces for them in our ‘Ag’ Colleges.
“It’s something I’ve raised with (Agriculture Minister) Simon Coveney – it’s something he is consciously aware of – and we do need to address the logjam that’s in our system. I welcome the fact that so many people want to be trained but we have to make sure we have the resources to train them.”
Ms McGuinness added: “It is a complete turnaround in the space of the past five to 10 years; not too long ago, agriculture was considered an industry of the past, it was history, whereas now it’s not. But we’re going to have to see how best we can support this new generation of farmers and how there will be an inevitable changeover in land ownership given the inevitable of time and age. I feel it’s an exciting time for Irish agriculture, but we need to support those future guardians of the industry, and that’s going to require additional training resources.”
While the potential resource boost for Kildalton College was being mooted in Brussels, the prospect of the college forming part of a Technological University of the South East does not appear to have been formally discussed.
Yet given WIT President Willie Donnelly’s commitment to the development of the Smart Agri sector at academic level and throughout the region, it would be a surprise if Kildalton, which houses WIT’s three-year BSc in Horticulture, didn’t figure in that discussion.
When referencing the Kildalton question to Renua’s Waterford general election candidate Mailo Power, she replied: “That, to me, would appear to form part of a shared vision which the Technological University process clearly needs. And until such time as all the stakeholders come together and build a shared vision, then I believe we’ll be at nothing. But I do have great faith in Willie Donnelly, and if anyone can get this across the line, he can. I have great hope and great confidence that he can help deliver a meaningful and progressive end product for the benefit of Waterford and the region.”
Ms Power, who took part in the recent talks with former Higher Education Authority (HEA) Chief Michael Kelly about reviving the WIT/IT Carlow merger discussions, added: “This process cannot proceed without increasing the capabilities of Carlow, because were that to prove the case, then it would surely have a negative impact on the Research & Development capabilities of WIT and its PhD levels; so agreement on this proposal really has to be achieved in a realistic way.”