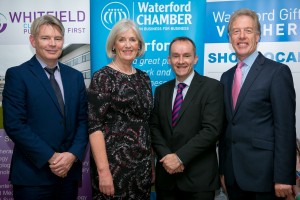 Whitfield Clinic, under new management, has ambitious plans to expand over the next three to five years, according to its Chief Executive Officer (CEO).
Speaking to The Munster Express, David Beirne said that Clinic management intends to expand staff consultancies, as well as taking on new procedures, thus increasing orthopaedic and ophthalmic health service provision in the region.
Mr Beirne, a Glenmore resident and WIT alumnus, said Whitfield (a private clinic) sees itself as complimenting University Hospital Waterford (UHW) and can play a role in reducing public waiting lists.
The clinic can accommodate both insured and non-insured patients, and the latter can be quoted for tests and procedures respectively; for example, an MRI scan at Whitfield costs €200, and can be carried out privately within weeks.
A cataract procedure can be conducted in a single day at a cost of €1600, with Mr Beirne adding that flexibility has been added to pricing after management introduced new efficiencies.
Not having insurance can, in the long term, prove costly for many patients, with hip or knee surgery costing anything between for €15,000 and €20,000, depending on overnight stays and consultancy fees.
Sports injuries are among the specialty services offered at Whitfield, with patients and athletes travelling from all over the country for treatment at the hands of, for example, Tadhg O’Sullivan and Pat Carton.
It’s worth recalling that the 2007 election campaign featured a major push for oncology/radiotherapy provision in Waterford. This is now offered at Whitfield, saving many patients stressful journeys to either Dublin or Cork. Advance treatment for prostate cancer can also be carried out at the centre.
Whitfield offers treatment and imaging services for public and private patients. The centre was developed on the UPMC’s ‘hub and satellite’ model, linking patients being treated at Whitfield to the expertise and technology available at UPMC in Pittsburgh (Pennsylvania) one of America’s leading cancer care providers (for more, visit www.upmcwhitfieldcancercentre.ie).
Whitfield currently has 24 beds available for those who may need to stay longer – for example, a after a hip operation, a patient might need to stay for five days or longer, which can push up the costs of hip and/or knee replacements.
Whitfield has built up a reputable level of expertise in this area with hips and groin treatment particularly prevalent. GPs from all over the region are thus referring work to Whitfield from South Tipperary, Kilkenny, Wexford and elsewhere, even East Cork.
Clinic management hopes to take on further gastro intestinal work and treatments in the near future, while its relationship with WIT is deepening, whose Nursing Faculty utilises the hospital for work placements – many of its graduates have also found work there.
There is also an EU funded research plan worth €2 million being invested in a vision centre under Whitfield Professor Stephen Beatty in collaboration with WIT’s Science Department..
Whitfield Clinic has 160 direct employees, consultants and nurses, which has created a local spend of €28 million in the local economy on consultants, supplies, services and other purchases.
Management plans to double throughput business over the coming five years.
The IBRC bank currently owned by the Government and formerly Anglo Irish Bank is in control of the clinic, which is under new management and a new board of directors.
The board includes Pat McCann (ex-managing director of Jury’s), Phil Shovlin (ex HSE), Seamus Taaffe (ex-KPMG senior auditor) and Maura McGrathm (Human Resources specialist and formerly of Bank of Ireland).
IBRC appointed Kieran Walsh of KPMG as share receiver, who runs the Clinic on behalf of the bank with the new board answering to him. There is now full financial stability and all previous creditors have been paid.
Carole Broadbank is Whitfield’s Clinical Services Director while Nuala Walsh is the HR manager.