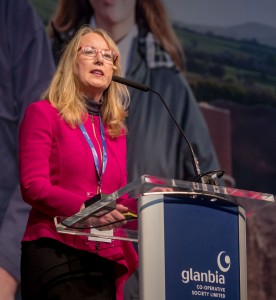 Over 93 per cent of Glanbia Co-op shareholders green lit the creation of the new Glanbia Ireland joint venture, when voting for the proposal at the Special General Meeting held at Punchestown Event Centre on Thursday last.
The new entity will bring together Glanbia Ingredients Ireland (GII), Glanbia Consumer Products and Glanbia Agribusiness (i.e. Dairy Ireland) as a joint venture, which will be 60 per cent owned by Glanbia Co-op and 40 per cent owned by Glanbia plc.
The proposal, which was first announced in late February, will lead to Glanbia Co-op paying €112 million to acquire a 60 per cent shareholding of the plc’s Dairy Ireland division.
Added to this, Glanbia Co-op shareholders also voted to distribute (by way of a ‘spin-out’) almost 5.9 million shares in Glanbia plc to all members of the Co-op.
The value of this spin-out is estimated at €100 million based on the Glanbia plc closing share (on February 17th) of €17.13. Co-op shareholders also voted to allocate up to €40 million of its resources to Member Support.
“I’m delighted that Glanbia members have voted overwhelmingly in favour of taking a majority stake in Glanbia’s consumer and agribusinesses,” said Glanbia Co-Op Chairman Henry Corbally.
“It’s an historic day for our Co-op and the proposed formation of Glanbia Ireland is an exciting development for Glanbia farmers.”
“I’m also very pleased that our members endorsed the proposals to distribute approximately €140 million to all Co-op members with a share ‘spin out’ and through Member Support.
“We’re all proud of what Glanbia has achieved in recent years and the decisions taken (on Thursday last) will ensure that the Co-op is in a very strong position to face the future with confidence.”
In reaction, IFA President Joe Healy welcomed the huge turnout of farmers at Glanbia Co-op’s Special General Meeting where shareholders supported changes to the Glanbia structure to create Glanbia Ireland.
He stated: “The success of Glanbia Ireland will be judged in the long run on its ability to deliver strong base prices for milk and grain, and to deliver competitively priced inputs.”
Meanwhile, ICMSA President John Comer believes the proposal’s benefits and potential benefits outweighed concerns which members had expressed prior to last Thursday’s vote.
“Farmers operate in a competitive environment where every euro counts and they must be free to purchase their inputs from the most competitive outlets available so the proposed new entity cannot – and must not – put any barriers to such competition and freedom to purchase from any source.
“We raised these matters directly with Glanbia who acknowledged the concerns and we’re confident that, the new entity will address these issues.”
John Comer said it’s crucial “that the new entity delivers for farmers in terms of milk prices and competitively priced inputs and vindicates the farmers’ decision to support the proposal”.