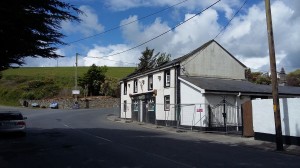 Hayes's Pub in Bonmahon, which was badly damaged by fire on Thursday last.

A COPPER Coast community has rallied round in an extraordinary show of community spirit after a popular pub was badly damaged in a fire last week.
A fire broke out in Hayes’s Pub in Bonmahon on Thursday afternoon last, resulting in significant damage to the building which is located near the village’s popular beach.
The local community has rallied round in support of the local pub and its owners, and have organised a number of fundraising community events.
Owners Richard and Louise Dowling and their family said they have been blown away and overwhelmed by the huge level of support which has been shown to them since the incident occurred.
A charity football match took place at the weekend between Bonmahon and Stradbally GAA clubs.
Meanwhile, a table quiz is scheduled to take place this Friday night, May 26th in the Copper Coast Geopark Centre in the village.
The quiz, which has been organised by members of the community, starts at 9pm and tables of four cost €40.
Hayes’s Pub has been an important meeting point in Bonmahon village for many years, and especially in recent years after the village lost many of its key services.