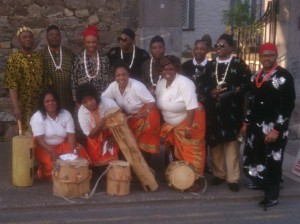 The most successful Africa Day in many years took place at the Saint Patrick’s Gateway Centre on a sun-kissed Thursday last.
It was a case of standing room only given the huge cross section of nationalities which were in attendance, portraying their respective cultures through music, dance and fashion, with over a hundred people gathered inside the venue.
The Reverend Doctor Sahr Yambusu of the Methodist Church put a great effort into organising the event, which was also supported by Waterford City & County Council, represented on the night by Metropolitan Mayor John Hearne (SF), who celebrated his wedding with Mary Pat Fitzpatrick the following day.
The free event featured music from DJ Mr Sunday, and light refreshments, including Ethiopian coffee.
Africa Day, designated by the African Union as an annual celebration of the continent’s unity, falls on May 25th annually.
Celebrations to mark the day are held across the globe: in some African states, May 25th is a designated national holiday, while in diverse cities – such as New York, London and Washington – academic gatherings and cultural showcases are held to mark the day.
There were great cheers on the night for the event’s opening entertainers: children who are staying in direct provision performed a special dance to kick off the event, which was followed by a beautiful poem by Laura, a native of South Africa, which featured the sentiment, “Africa born in me, but an African and Black Irish’.
A fashion show, compered by Tramore resident Princess, was also held on the night and featured clothing from Ethiopia, Ghana, Cameroon, Zimbabwe, South Africa, the Republic of Congo, the Democratic Republic of Congo, Nigeria, Uganda and Sudan. Other countries represented on the night included Malawi, Botswana and the Kingdom of Lesotho, the latter being represented by its Charge D’Affairs from its Embassy, Mr Koplana.
Mr Koplana spoke of the 1958 and 1963 Africa Day Conferences held in Ghana and Ethiopia respectively, during a time of great political struggle during which 17 African countries achieved their independence. Those struggles resonated with the Irish experience, he added.
“The colour of one’s skin should matter as little as the colour of one’s eyes,” said Mr Koplana (who recently attended an interfaith event in Tramore), concluding his comments with the declaration: “May God Bless Africa and Ireland.”
Also in attendance was Bishop of Waterford & Lismore, Alphonsus Cullinan, who told The Munster Express about his visit to Zimbabwe last November, where he witnessed much poverty. He added that he found the people exhilarating, and still, despite their circumstances, they were imbued with a great spirit and commendable enthusiasm.
Also in attendance were Carmel Banville on behalf of Gardai and former councillor Seamus Ryan (Lab) along with other community leaders from Waterford.
Mayor Hearne recalled his long-standing support for the ANC campaign in South Africa, a country he visited during the Apartheid years and also spoke of his attempts (along with colleague Pat Fitzgerald) to enter Gaza via the MV Saoirse, to deliver €30,000 worth of humanitarian aid, back in 2011. His story won cheers from the gathering.
The Mayor also extended his sympathies to the victims of the Manchester atrocity and spoke of the need to develop greater mutual understanding between different cultures. He also offered his assistance to anyone present who may have been experiencing difficulties in obtaining housing in Waterford, an issue which has been at the centre of his year in office.
The Reverend Yambasu thanked “all who had endeavoured to be here”, and to all the organisations and individuals, including Kenny Adeleye and Alex Baizoukou, for their help in co-ordinating the event.
He referred to African leaders of the past “whose vision, aspirations, hard work, and struggle gave birth to this day”.
Among those he named were Kwame Nkrumah, Emperor Haile Selassie (the first President of the Organisation of African Unity, later the African Union), Julius Nyerere, Jomo Kenyata, W.E.B Du Bois, Marcus Garvey, Obafemi Awolowo, and Hastings Banda, all who are in the living memory of those familiar with the history of the Pan-African Movement.
“Among the many things that inspire me to celebrate this day is the simple fact that the ideals, ideas, history, achievements, vision and hope we celebrate on this day were initiated and propelled by people of African heritage living outside the continent of Africa, like most, if not all Africans here today,” he continued.
“They advocated and fought for the freedom, just treatment, self-determination, dignity, pride, and right of Africa and Africans in and outside of the continent of Africa. They taught us that while other people may support us Africans in achieving these aims, they cannot do it for us. Instead, it is our responsibility to define and construct our own future in Africa and wherever we are.”
In October 1945 the fifth Pan-African Congress was held in Manchester (All Saints) where it was described as ‘a historic’ event. A red plaque on the wall of the hall at All Saints reads that “decisions taken at this conference led to liberation of African countries.”
Given the appalling events three nights previously, the Reverend Yambusu invited all in attendance to stand in a moment of silence “in solidarity with the peoples of Manchester in their pain, sufferings, prayers, and aspirations”.
A night of celebration and commemoration was a credit to all who contributed to its organisation.