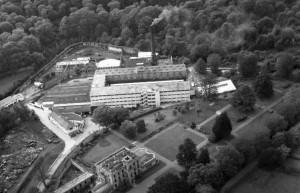 The Irish Tanners site, which was also the home of Portlaw's once thriving Cotton Mill