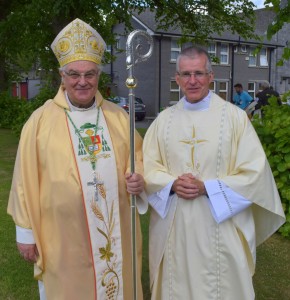 NEWLY ordained priest Fr Brian Griffin celebrated his first Mass at the Church of the Assumption in Slieverue yesterday (Monday).
For parishioners, his ordination at St Mary’s Cathedral in Kilkenny on Sunday last was a source of great joy.
Born and reared in Slieverue, Fr Griffin was aware of his calling from an early age.
“For some reason, when I left school aged 16, I wanted to be a priest,” he explained.
Fr Griffin has attributed his vocation to his upbringing and the many priests whose work he admired.
“We’re lucky in Slieverue as we’re in the Diocese of Ossory but we’re so close to Waterford. We have so many churches and parishes around us that I got to know many different priests. The priests I grew up with were an inspiration,” he said.
However, he decided against entering the priesthood straight away after school and instead studied a computing course at the Regional Technical College (now WIT).
While he says he enjoyed his time and the socialising which goes with student life, he decided that a career in computers was not for him.
“I knew I didn’t want to spend the rest of my life looking at a computer screen so I returned to college and did a course in Production Engineering,” he said.
With his qualification, he went on to work in local factories including Bausch and Lomb, Ray Ban and Waterford Crystal.
Throughout all this time, his faith was always a constant in his life.
“I always went to Mass and always had a great interest in faith and theology and what life is all about,” he explained.
“I used to go to lectures about anything related to religion. I was always wondering why priests, bishops, and the Pope do what they do and why people believe what they believe.”
In 2009, after the closure of Waterford Crystal, he finally made the decision to enter the priesthood.
He admitted that it was probably seen by many as a “countercultural thing to do” at the time.
“But my own family members weren’t too surprised. They were probably surprised that I had left it so long,” he said.
He informed his parish priest Fr Pat Comerford of his decision.
“I said ‘don’t get a shock but I think I have a calling to be a priest’. I thought he might fall of the chair, but he was very cool about it. Two weeks later, I was sitting down with the Bishop in Kilkenny.”
He continued: “Even though I was stepping into the unknown, once I made the decision I was going to go for it. I always had questions, and in Maynooth I was able to get answers. I thought that in the church you couldn’t ask questions and that you had to fit in, but it’s not like that at all. You are encouraged to ask questions.”
He explained that his fellow student priests came from diverse backgrounds.
“You couldn’t meet a nicer bunch of fellows. They were always so genuine and down to earth,” he said.
Although a number dropped out along the way, a total of 15 have made it to ordination.
“The training we received is Maynooth was top notch,” said Fr Griffin.
As part of his placement, he worked in St John’s Parish in Kilkenny and Cork University Hospital
“It’s really make or break time for a lot of the guys,” he explained.
“When you get the experience of working in a parish or hospital, you know whether it’s for you or not. It was such an honour to work in somewhere like Cork University Hospital.”
While in Maynooth, he also enjoyed an opportunity to teach in a local secondary school.
“There is such goodness in young people. They are wonderful and they too are asking the big questions in life,” he said.
But how, in his opinion, can the church attract more young people?
“Don’t give out to them for not going to Mass, go home from Mass with a smile on your face and they will wonder what they’re missing out on,” he said.
Fr Griffin believes the role of the priest remains pivotal to communities throughout the country.
“The priest is there to provide service to the people. I never saw myself as a supervisor or leader or manager at work, even though I may have been called that. I always wanted people to work with me and not for me. That’s the way I see priests working in parishes. They are there to guide and lead.”
He added: “The church isn’t just the building in the middle of the parish or the priests. Anyone who is baptised is part of the church.”
Fr Griffin will be posted in St John’s Parish, Kilkenny, an area he is familiar with from his placement as part of his studies.
“I will be very busy but I couldn’t have asked for a nicer posting,” he said.
Fr Griffin says it’s an exciting time to be part of the church and he is looking forward to the journey ahead as he believes there is a positive future for the church.
“What greater honour could you have than to be there at the important stages in people’s life? To baptise a baby, marry a couple, or bury our beloved dead. I even get goose bumps thinking about it. And when things happen in life, where do people go? They go to God. Priests are always there for people,” he said.
“I thought I’d be chucked out for asking too many questions! But I’ve made it to other side and I’m looking forward to taking up my new role.”
All in Slieverue and the wider region wish Fr Brian Griffin the very best as he embarks on his new journey.